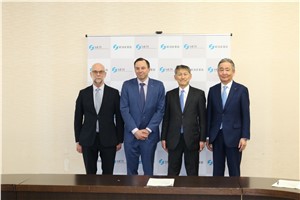 GE Gas Power (NYSE: GE) today announced the signing of a Memorandum of Understanding (MoU) with IHI Corporation (IHI), a leading heavy industry manufacturer based in Japan to jointly develop ammonia combustion technologies for heavy duty gas turbines to generate electricity with reduced or near zero CO2 emissions. The collaboration aligns with the companies’ commitment to support the global transition towards a lower-carbon future in the power generation sector.

The MoU marks a significant milestone following the announcement in June 2021 of the first MoU between GE and IHI to carry out an  economic assessment for the use of ammonia as a carbon-free fuel for both existing and new gas turbines. As part of the MoU, both parties will further define a technology roadmap to develop gas turbine technologies by 2030 that will enable GE’s 6F.03, 7F and 9F gas turbines to fire up to 100% ammonia in a safe and commercially competitive manner, with potential implementation across additional gas turbines in the future.

“GE - as a leader in combustion technologies - will bring its extensive experience and expertise in engineering and manufacturing gas turbine combustors and balance of plant systems. GE continues to play an important role in supporting the advancement of the world’s energy goals, working alongside IHI Corporation which is a leader in developing ammonia combustion technologies and value chain development globally,” said Scott Strazik, CEO of GE Vernova. “We hope that this collaboration will pave the way for power plant operators to pursue the adoption of carbon-free fuels such as ammonia for power generation in their GE gas turbines and significantly contribute towards lowering carbon emissions in the power sector globally.”

Hiroshi Ide, President of IHI Corporation said, “IHI continues to develop businesses across the entire fuel ammonia value chain, from production to transport, storage and utilization. Through this collaboration with GE, we will focus our efforts on satisfying domestic and overseas demand for large-scale ammonia gas turbines, stimulating further demand for fuel ammonia and expanding the fuel ammonia value chain to rapidly realize a carbon-neutral society.”

GE has been present in Asia for over a century, where GE Gas Power operates in more than 22 countries with an employee base of over 4000+ employees. GE has been present in Japan since 1886, when the company first delivered generators to government printing factories. In the power sector, GE is committed to supporting the country’s goals of becoming a carbon neutral society by 2050 through a more diversified energy mix with larger shares for renewable energy, higher efficiency for thermal generation to replace aging and less efficient power plants, and expanding the role of ammonia and hydrogen as a fuel for gas turbines while adding CCUS technologies as a pathway to enabling decarbonization in future. Today, GE’s fleet represents close to 50% of gas-powered capacity in the country.

Tell a friend:
GE and IHI Sign Memorandum of Understanding to Develop Gas Turbines that Can Operate on 100% Ammonia