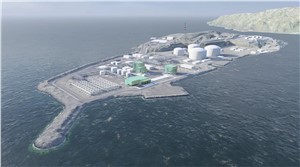 The Snøhvit partners will invest NOK 13.2 billion (2022) in upgrading the Hammerfest LNG plant, HLNG, at Melkøya. The project involves gas onshore compression and electrification and will secure the future of HLNG.

Today, at a ceremony in Hammerfest, Equinor submitted a plan for development and operation (PDO) of Snøhvit Future to the Minister of Petroleum and Energy on behalf of the Snøhvit partnership.

Onshore gas compression will provide enough flow from the reservoir to extend plateau production and maintain high gas exports from HLNG beyond 2030. Electrification will reduce CO2 emissions from HLNG by around 850,000 tonnes per year.

“Snøhvit Future will strengthen Norway’s position as a reliable and long-term supplier of LNG to Europe. Electrification will allow us to deliver this gas with close to zero greenhouse gas emissions from production. The project will secure long-term operations and gas exports from Melkøya towards 2050,” says Geir Tungesvik, Equinor’s executive vice president for Projects, Drilling & Procurement.

During normal production conditions, HLNG delivers 18.4 million standard cubic metres of gas per day, or 6.5 billion cubic metres per year. This is equivalent to the energy demand of around 6.5 million European homes, or 5% of all Norwegian gas export.

“Snøhvit Future is a comprehensive and complex project in which expertise, collaboration, and experience in the Norwegian petroleum cluster and within the partnership have brought us to an important final investment decision. The project has good socioeconomic benefits and will create strong ripple effects in the north,” continues Tungesvik.

Three large modules will be installed at the plant, which will also be subject to extensive modifications. In addition, there will be a high activity level in the Hammerfest region, such as the construction of a tunnel and a transformer station to bring electric power to Melkøya.

Higher demand for power to HLNG will trigger Statnett’s construction of a 420 kV power line from Skaidi to Hyggevatn and the Snøhvit partners will provide a considerable investment contribution. The new line will strengthen the power infrastructure by providing higher grid capacity to Hammerfest, paving the way for new industrial developments in the area.

Electrification – an important contribution to reaching Norway’s climate goal
“We are converting to electric operation at Melkøya, thereby reducing annual emissions of CO2 by around 850,000 tonnes. This is one of the largest individual emission reduction measures for decarbonization of oil and gas production in Norway. The project is a key contributor to the energy transition,” says Grete B. Haaland, senior vice president for Exploration and production north.

“The Snøhvit Future project underlines our commitment to the North. It is crucial to secure operation and maintain existing jobs on Melkøya. In the development phase we estimate additional regional employment of around 1680 full-time equivalents. We are focusing on meeting the ambitions of North Norwegian content in the contracts to be awarded in the project phase towards operation start in 2028,” continues Haaland.

HLNG has generated significant socioeconomic benefits in the city of Hammerfest, the county of Finnmark, and the trade and industry in North Norway since its initial development in the 2000s. The plant is a cornerstone in the region, with around 350 employees as well as around 150 contractors and apprentices. There are indirect socioeconomic benefits in addition to this.

As a result of the development, the operations phase is expected to be extended by 10 years while maintaining current levels of employment.