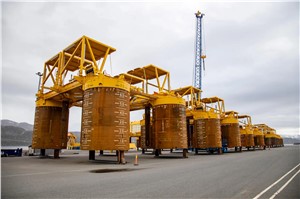 Askeladd is a satellite field of the Snøhvit Field and developed as a subsea tie-in to the Snøhvit facility and Hammerfest LNG.

During normal production, Hammerfest LNG (HLNG) delivers 18.4 million standard cubic metres of gas per day, or 6.5 billion cubic metres per year. This corresponds to the needs of around 6.5 million European households, or 5% of all Norwegian gas exports.

"HLNG delivers significant volumes to customers in Europe, and the gas from the Barents Sea reinforces our position as a predictable and reliable gas supplier. Askeladd and other projects in the region will ensure further value creation and production from HLNG for decades,” Haave adds.

The project was originally completed in 2020, but start-up had to wait until the Melkøya plant resumed operations after the fire the same year. The development was delivered on schedule and NOK 650 million below the cost estimate of NOK 5.2 billion.

"Just over 1.5 million person-hours of work have gone into the project, most of them performed by our suppliers. During the project period, Askeladd generated 250–300 person-years of work in Northern Norway, mainly in Hammerfest. In addition, many employees and suppliers have helped restart Hammerfest LNG, which makes it possible to phase in both Askeladd and future projects," says Trond Bokn, Equinor's senior vice president for project development.