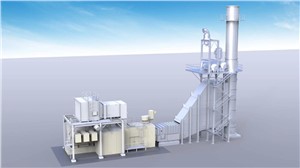 Mitsubishi Power, a power solutions brand of Mitsubishi Heavy Industries, Ltd. (MHI), has received an order for an H-25 gas turbine for the Taiwanese firm Chang Chun Plastics Co., Ltd. The turbine with 30-megawatt (MW) output capacity will be the core of a new high-efficiency, natural gas-fired cogeneration (combined heat and power) facility at the company’s Dafa Factory in Kaohsiung. Operation is scheduled to begin around winter 2023, with the unit supplying power for the company’s factories, and steam for manufacturing processes. This is the first H-25 gas turbine that Mitsubishi Power has supplied in Taiwan.

Chang Chun Plastics’ Dafa Factory is located in an industrial park east of downtown Kaohsiung City (Daliao District). The gas turbine will replace the existing oil and coal-fired boiler facility, part of a project conducted in response to a request from the Kaohsiung authorities to reduce coal consumption based on the global trend toward reducing CO2 emissions, and a shift in Taiwan’s energy policy.

Mitsubishi Power will supply the H-25 gas turbine and auxiliary machinery, and dispatch engineers to provide support for installation and trial operations.

Chang Chun Plastics is the core company of Chang Chun Group, a major petrochemical conglomerate in Taiwan. Headquartered in Taipei, Chang Chun Group comprises numerous group companies and factories in Taiwan and around the world.

Since 1984, Mitsubishi Power has supplied Chang Chun Group with major equipment for the power and cogeneration facilities at its factories, including nine steam turbines and five boilers. Mitsubishi Power continues to provide after-sales service for the equipment it has supplied, as well as various types of service solutions. This latest order is a reflection of the trust established by this track record, and the long-standing good relations between the two companies. In addition, Chang Chun Group plans to introduce additional gas turbines in the future, and has concluded a forward-looking Frame Agreement with Mitsubishi Power for delivery of a total of four H-25 gas turbines, including the one for this project.

The H-25 is a heavy-duty gas turbine(Note) with outstanding reliability confirmed by its record of long operating hours. Since the initial order in 1987, Mitsubishi Power has established a solid track record of operating performance, selling more than 190 units in Japan and overseas. Compared to a conventional boiler type cogeneration plant, the H-25 contributes to greater plant efficiency and reduced CO2 emissions. It is a powerful tool for the energy transition, as the market for distributed power sources shifts from coal to natural gas, and eventually to hydrogen fuel.

Going forward, Mitsubishi Power will further proactively pursue business activities in the distributed power sources market, including for industrial-use private power generation and cogeneration systems in Japan and overseas, contributing to stronger industrial foundations for countries and regions, and reducing the environmental load from energy.