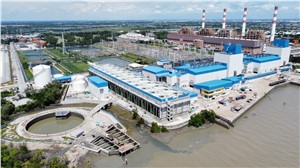 This project is aligned with EGAT’s goals to improve efficiency and reliability, reduce CO2 and NOx emissions, and lower electricity costs for its overall assets, replacing them with highly efficient combined cycle power generation equipment.

“This project is in response to the government’s commitment to the retirement of less efficient and older plants, to be replaced with new gas-powered highly efficient combined-cycle capacity as a solution to reduce emissions and increase the reliability and flexibility of Thailand’s power system. We trusted GE as an energy player with future-proof technology to help us provide more reliable and more sustainable power for our population now and in the following years” said Mr. Prasertsak Cherngchawano, EGAT Deputy Governor - Power Plant Development and Renewable Energy.

The new blocks add approximately 1,400 Megawatts (MW) of electricity, the equivalent power needed by approximately 3 million Thai homes. They are powered by two of GE’s 9HA.02 gas turbines, the company’s most efficient 50 Hz gas turbines, for the first time in Thailand, as well as two advanced STF-A650 steam turbines, and two W86 generators. GE has also signed a long-term services agreement with EGAT to provide parts, repairs and maintenance services for these sites.

“In Thailand, GE continues to support the advancement of the country's energy goals, working alongside our long-term customer EGAT," said Ramesh Singaram, President & CEO for GE Gas Power Asia. “Similarly, the growth of gas power generation plays a crucial role in facilitating Thailand's transition to a future with lower carbon emissions, as gas continues to be both an enabler of the energy transition as well as a destination technology. Today, there is increased interest in using hydrogen fuel to reduce carbon emissions from power generation. As a world leader in gas turbine fuel flexibility, we are taking proactive actions towards decarbonizing gas generation capacity (both new and existing plants) via a combination of pre and post combustion technologies. Advancements in hydrogen-based power generation and carbon capture and sequestration (CCS) solutions enable gas turbines to be a destination technology and not just a bridging short-term investment.”

GE advanced gas turbines have been operating with hydrogen fuel blends in a variety of industrial applications, including steel mills, refineries, and petrochemical plants for decades. GE’s H-Class gas turbine portfolio currently has the capability to burn up to 50% by volume of hydrogen when blended with natural gas.  This capability is enabled by the DLN2.6e combustion system that is standard on current 9HA.01/9HA.02/7HA.03 gas turbines offerings. GE’s H-Class heavy duty gas turbine fleet - the fastest growing fleet in its class - has secured more than 50 customers across 20 countries and GE expects the rapid maturation of commercial operating HA gas turbines to continue in 2022.

The country’s electricity capacity amounts to approximately 51 GW (as of April 2022 Source: Enerdata). Gas has been following an upward trend since 2016 (+5.1 GW) and currently has the largest share with 51% of the total capacity. GE has had a presence in Thailand since 1900. GE Gas Power equipment generates up to 30% of Thailand’s power with a fleet of over one hundred gas turbines. Today, GE is one of Thailand's largest foreign infrastructure providers with businesses including energy, aviation, and healthcare. GE’s presence includes offices in two locations, as well as a center for aeroderivative services and tooling for heavy duty gas turbines.