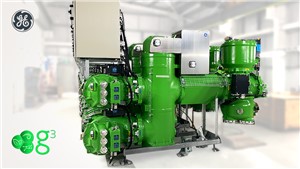 Paris, FRANCE - July 12, 2022 – GE Renewable Energy’s Grid Solutions business (NYSE-GE) has been awarded a contract from Energinet, owner, operator, and developer of transmission systems for electricity and natural gas in Denmark, for 31 SF6-free gas-insulated substation (GIS) bays. These bays, to be installed at the Amagerværket (AMV) and Vigerslev Koblingsstation (VIK) substations in Copenhagen, will reinforce this city’s electrical grid to support its steadily increasing population growth and electrification agenda.

Based on its mission to ensure that the Danish energy system and grids are “prepared for a future with 100% renewable energy”, Energinet selected GE’s industry-leading g3 (pronounced “g”- cubed) gas as a game-changing alternative to SF6—a potent greenhouse gas. GE’s g3 gas has a global warming potential (GWP) of about 99% less compared to SF6. Moreover, g3 products have a significantly improved life cycle assessment (LCA) compared with SF6 products and other alternatives.

To date, a total of three Danish utilities - Energinet, Cerius, and Radius Elnet - have installed GE’s g3 products on their electrical grids. It’s a further step forward in Denmark’s plans to reduce its greenhouse gas emissions by 70% in 20301 and become a resource-efficient economy entirely independent of fossil fuels by 20502. To support its greenhouse gas policy, Denmark has imposed a high tax of €577 per kg on SF63, making GE’s g3 products even more attractive to its transmission and distribution system operators (TSOs).

“Utility operators in Denmark are very aware of their environmental footprint and the impact it has on their communities and the world around them,” said Eric Chaussin, Senior Executive High Voltage Products Division Leader at GE’s Grid Solutions. “And they aren’t alone. Today, more than 30 leading electrical utilities from 13 European countries and South Korea have already adopted GE’s g3 products for their high voltage networks, avoiding the addition of more than a million tons of CO2 equivalent to the grid. That’s the equivalent of removing about half a million petrol cars from the road for one year.”

A report from the EU Commission concluded that fluoronitrile-based gas mixtures—such as g3 gas may be the only insulating and switching gas alternative to SF6 when space is a constraint, such as in urban areas. That’s because fluoronitrile-based gas products feature the same compactness and performance as traditional SF6 equipment, unlike other SF6-free solutions.