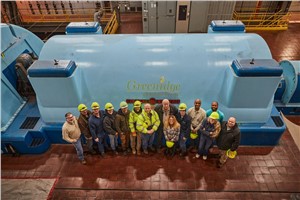 "Our recent senior notes offering has provided us with the liquidity to advance a number of strategic growth initiatives," said Greenidge's CEO Jeff Kirt. "Increasing our order with Bitmain brings our current and committed miner capacity to over 130MW and 4.1 EH/s delivering in the next 12 months. Additionally, the site development efforts we announced today are consistent with our plans to expand to new locations in North America . Operating multiple sites in our portfolio will allow us the flexibility to reposition assets in order to maximize operating cash flow and provide operational redundancy, if required."

Greenidge is evaluating over 3,000MW of options in the Texas and South Carolina markets to determine the most attractive locations to develop. The Company expects to deploy substantially all of the 22,500 miners ordered from Bitmain in the last six weeks at one or more of these locations.

Greenidge has more than doubled its recently announced order with Bitmain from 10,000 S19j Pros to 22,500. The units will deliver in the second and third quarters of 2022. In total, Greenidge has approximately 29,000 miners currently on order with Bitmain delivering between now and the third quarter of 2022. Once deployed, these miners would bring Greenidge's total mining capacity to approximately 44,950 miners representing 4.1EH/s and 130MW of capacity.

Greenidge's exclusive agreement with a developer for multiple sites in Texas (the "Texas Development Sites") includes at least six sites in the pipeline that Greenidge and the developer have identified as potential locations for Greenidge data centers. In total, the Texas Development Sites have over 2,000MW of electrical capacity and include several locations surrounded by abundant wind and solar power generation.

In South Carolina, Greenidge has signed a definitive agreement with a subsidiary of LSC Communications ("LSC") to purchase LSC's facility in Spartanburg, SC. The transaction is structured as an outright purchase of the site from LSC rather than a lease, as was previously contemplated and announced in July 2021. The purchase price for the 175-acre site, including over 750,000 square feet of industrial buildings, is $15 million. The transaction is expected to close in early December 2021.

Together, the Texas Development Sites, the Texas Generation Sites, and the South Carolina site have over 3,000MW of combined electrical capacity. Greenidge now anticipates that it will have electrical capacity for over 500MW by 2023. Greenidge plans to continue to offset 100% of the carbon emissions associated with its mining operations at all current and future locations.

Greenidge currently operates 45MW of mining capacity at its existing site in Dresden, NY, and expects to continue to operate the facility. The expansion plans announced today, once developed, would provide Greenidge with the redundancy to absorb Dresden's current and planned mining capacity at other locations, if necessary.

Greenidge intends to finance its expansion plans with cash on hand, including the proceeds of its recent $55.2 million senior notes offering, as well as operating cash flow. Additional debt and/or equity financing could contribute to a further expansion or to the acceleration of the expected timeframe of expansion.

Separately, in response to investor inquiry, the company is providing clarification regarding certain topics pertaining to its Common Equity:

As previously disclosed, in September, Greenidge announced it had entered into an equity purchase agreement with B. Riley Principal Capital, LLC and filed a Form S-1 Registration Statement (the "Equity Purchase S-1") with the Securities and Exchange Commission relating to the equity purchase agreement. The maximum number of shares that Greenidge can sell pursuant to the Equity Purchase S-1 is 3.5 million, which would increase the number of Greenidge's outstanding shares of Class A and Class B Common Stock from approximately 38.7 million shares as of October 1, 2021, to 42.2 million shares, an increase of 9.0%.