Jane Fonda Joins Social Compassion in Legislation, Elected Officials, Environmental Protection Organizations in Call to End All Oil Drilling and Production Off the Coast of California 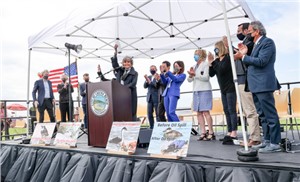 On Monday, Academy Award-winning actor and longtime activist Jane Fonda joined political advocacy nonprofit, Social Compassion in Legislation, State Senators Dave Min and Ben Allen, Assembly members Cottie Petrie-Norris and Richard Bloom, Laguna Beach Mayor Bob Whalen, Orange County Supervisor Katrina Foley, representatives from environmental protection group, the Center for Biological Diversity, and hundreds of supporters in Laguna Beach for a press conference to call for an end to all offshore oil drilling and production in both state and federal waters along the coast of California, including in areas under existing leases.

The headliner for the group, Jane Fonda, laid out the case for ending not only offshore drilling, but phasing out all fossil fuels in her speech, "Climate scientists have been telling us for quite a while now that it is imperative that we keep warming no higher than 1.5 degrees Celsius above pre-industrial levels if we are to avoid catastrophe. What do the scientists mean by catastrophe? They mean not just far worse storms, fires and droughts than we saw this year, it means the irreversible collapse of entire ecosystems. It means we lose control of the systems we rely upon for life. Like the ocean that provides half the oxygen we breathe. That's why the scientists are calling this a code red, existential crisis."

She continued, "We can't just demand an end to offshore drilling, we need to demand Governor Newsom issue no permits for new oil wells, immediately protect vulnerable communities with a health and safety buffer between wells and where people live, work and play and phase out all existing onshore oil and gas production more quickly than he has proposed."

In the continuing aftermath of the devastating Huntington Beach oil spill, which released an estimated up to 130,000 gallons of oil into the ocean and forced closures of beaches up and down Southern California, the group drew distinction between their call to end all offshore oil drilling and production to those calling for only stricter regulatory oversight of oil drilling operations and moratoriums.

"The recent Orange County Oil Spill illustrates once again that offshore oil drilling is a bad deal for Californians," said Senator Dave Min . "Offshore drilling threatens our beautiful beaches, our fragile marine ecosystems, and our $44 billion coastal economy. There is only one way to ensure that California's coastline is never again terrorized by another oil spill, and that is to end ALL offshore oil drilling and extraction.

That means not only a moratorium on new oil leases but also ending all drilling performed under existing leases. Existing drilling leases, which run in perpetuity, have been responsible for every oil spill for the past 40 years and we must take every action at our disposal to end them immediately. We need to end offshore drilling now, not years from now.

I thank Ms. Fonda, Social Compassion in Legislation and its Founder and President Judie Mancuso, the Center for Biological Diversity, and my fellow state legislators and local elected officials for supporting this effort. I look forward to working with them as we carry this legislation forward when the Senate resumes session in January."

"Here in Laguna Beach , we have taken for granted our pristine coastline. But sadly, our bubble has burst by this horrific and inevitable oil spill," said Judie Mancuso, founder and president of Social Compassion in Legislation. "There is so much at stake already for our threatened marine and wildlife. The world's species are suffering the sixth mass extinction due to our addiction to animal agriculture and fossil fuels. And now, this spill has killed countless animals and will silently kill many more underneath the ocean's surface for months and months to come."

"Whether the spill happened from a misplaced anchor, rusty pipes, human error or technical malfunction, the fact is where oil is extracted and produced, spills happen. So, in order protect our coast, we must end these leases and decommission all these platforms to permanently remove this existential threat."

Social Compassion in Legislation will continue working to shut down all offshore drilling with stakeholders and elected officials throughout the lead-up to the 2022 California legislative session, which begins in January.

Tell a friend:
Jane Fonda Joins Social Compassion in Legislation, Elected Officials, Environmental Protection Organizations in Call to End All Oil Drilling and Production Off the Coast of California