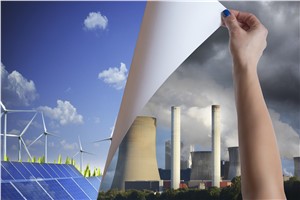 As Japan moves forward with its goal of becoming a carbon neutral society by 2050, GE (NYSE: GE), today shared its position that the accelerated and strategic deployment of renewable energy and gas power can make substantial progress in combatting climate change in the near-term in Japan, while securing a path to a lower-carbon future. In the newly published position paper, titled “Building a low-carbon power society”, GE provides recommendations on how the country’s power needs could be addressed with the combination of renewables and gas power plants.  The release of the white paper is timely in view of the country’s expected 6th Strategic Energy Plan in the fall of 2021, which aims to have Japan achieve a more diversified energy mix by 2030, with larger shares for renewable energy, the restart of nuclear power, and hydrogen/ammonia. The national plan also aims to enhance the efficiency of fossil fuel use and to increase energy conservation efforts.

Says Ramesh Singaram, President & CEO GE Gas Power Asia Pacific, “We applaud the government’s commitment to moving towards a more diversified energy mix given how the generation mix has changed over the past decade to be heavily dependent on fossil fuel despite the explosive growth in renewables. This, coupled with efforts to deploy low-carbon technologies, address regulatory and institutional barriers, and further enhance competition in its energy industry, will certainly help Japan on its path to achieving carbon-neutrality by 2050”.

Japan depends heavily on fossil fuels for power generation with coal and natural gas accounting for two-thirds of Japan’s electricity generation of 927 TWh. With the country’s 3E + S (energy security, economic efficiency, environmental sustainability, and safety) and decarbonization (CN) policies, it plans to invest heavily in renewables in the coming decades. To introduce renewables at a large scale, GE believes that necessary measures should be taken to mitigate the variable supply that’s inherent with renewable energy. This has become increasingly important with concerns on grid stability, especially in locations such as Kyushu, Tohoku, and Hokkaido where there are grid limitations.

Says Taiji Tomura, Country Manager from GE Gas Power, “Gas power is key to promote investment in efficient thermal power generation, to secure capacity value and support the introduction of renewable energy. Gas-fired power plants are available regardless of the time of day or weather conditions, providing a dependable capacity as long as needed, with a global average of 84%, whether for minutes, hours, days, or weeks at a time. To balance electricity supply and demand, variable renewables require dispatchable backup such as natural gas power plants or batteries to ensure system reliability”.

In addition to the emphasis on higher efficiency for thermal generation to replace ageing, less efficient power plants, the white paper also denotes the importance of hydrogen as a fuel for gas turbines and Carbon Capture, Utilization, and Storage (CCUS) technologies as a pathway to enabling decarbonization and avoiding lock in of CO2. New government policy will require new gas-fired power plants to be constructed “capture ready”, so that CCUS can be more easily deployed at a later date, thereby reducing the risk that new plants become stranded assets.

“Hydrogen is expected to play a central role in Japan’s lower carbon transition, as it is one of the first countries globally to launch a national hydrogen strategy” Says Taiji Tomura from GE “We have recently signed an alliance with a Japanese industrial partner  to develop an Ammonia Roadmap that could pave a way for reduced CO2 emissions while operating gas turbines in the region. With more than 100 units and 8 million hours of operation, GE has more experience with operating gas turbines on hydrogen and associated low-Btu fuels than any other gas turbine original equipment manufacturer.  We are excited to work with local partners to support the country’s goals of making hydrogen cost-competitive with natural gas.