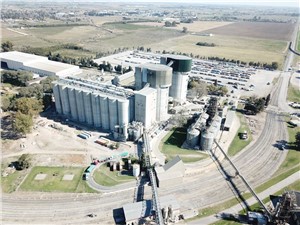 The technology group Wärtsilä will convert an existing captive combined heat and power plant from dual-fuel to gas fuel and support its operations with a ten-year maintenance agreement. The Punta Alvear plant in Santa Fé, Argentina is owned and operated by Boortmalt, world-leading producer of high-quality malt for the brewing, distilling, and food industry. This project is part of Boortmalt's sustainable development strategy in terms of energy consumption, which aims to reduce the group's carbon emissions by 50% by 2030. The order with Wärtsilä was placed in June 2021.

The conversion project, together with the long-term maintenance agreement, will raise the plant’s performance by increasing its efficiency and power output, while also lowering its operating costs. This in turn will lessen Boortmalt’s malt production costs. At the same time, the conversion will reduce the plant’s environmental footprint. The plant currently operates with a Wärtsilä 32DF dual-fuel engine, which will be converted to a Wärtsilä 34SG gas engine, with a 10% power output increase.

“After close collaboration with Wärtsilä and a successful 3-year maintenance agreement from 2018, we have collected valuable operational data for the plant. Based on this data, we have together evaluated the best way forward to improve performance. We feel sure that the gas conversion, supported by the maintenance agreement, represents a strong business case for us. We expect a three years payback time on the investment, followed by profit over the whole lifecycle,” commented Pablo Grassini, Plant Manager, Boortmalt.

“By carrying out this gas conversion project, we are in effect future-proofing the plant’s operational performance, since it will facilitate the future integration of energy from renewable sources, such as wind and solar. In the meantime, it will reduce the need for power from the grid, thereby lowering costs. We have enjoyed a strong relationship with Boortmalt for a number of years and this project, along with the close cooperation preceding the final decision, has further strengthened it,” said Jorge Alcaide, Wärtsilä Energy Business Director, Americas, Region South.

The project is scheduled to commence in March 2022, and is expected to be completed two months later in May.

Wärtsilä’s maintenance agreements are a key part of the company’s Lifecycle solutions. They are designed to optimise power plant performance through the utilisation of Wärtsilä’s advanced technology, software, and service expertise, which are supported by a holistic view and a thorough understanding of installations on a system level.

As gas grids expand and emission regulations tighten, conversions to natural gas become a viable alternative for power plants. Wärtsilä engines are flexible and easily adaptable to the use of gas as a primary fuel. Gas conversions will also enable the transition to future synthetic fuels, such as hydrogen. Wärtsilä has globally carried out gas conversions on more than 100 engines, in total 1,5 GW of power generation capacity. As an example, the annual nitrogen oxide (NOx) emissions eliminated as a result of these conversions is equivalent to the annual emissions from approximately 134 million cars.