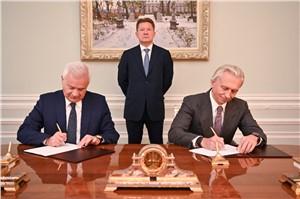 The parties discussed the state and prospects of strategic interaction between the Gazprom Group and LUKOIL aimed at, inter alia, implementing joint projects for the exploration, production, transportation and processing of hydrocarbon feedstock.

As part of the meeting, Alexander Dyukov and Vagit Alekperov signed an agreement to create a joint venture (JV) for the development of a major oil-and-gas cluster in the Nadym-Pur-Taz region of the Yamal-Nenets Autonomous Area.

The JV is being set up via Meretoyakhaneftegaz, a subsidiary of Gazprom Neft. The new production center will have at its core the Tazovskoye field, which was put into production in June 2021. In addition, the JV’s activities will cover the development of the Severo-Samburgskoye and Meretoyakhinskoye fields, as well as two Zapadno-Yubileyny licensed blocks. The aggregate geological reserves of the new cluster amount to more than 1 billion tons of oil and about 500 billion cubic meters of gas.

Meretoyakhaneftegaz is the first asset to be managed by Gazprom Neft and LUKOIL on a parity basis. A considerable part of the company’s geological reserves is located in the Achimov sequence and belongs to the hard-to-recover category.

Over the next few months, the parties plan to prepare detailed binding documentation pertaining to the establishment of the JV, as well as obtain the requisite corporate and regulatory permits.

Furthermore, the two companies will continue to explore additional opportunities for expanding their cooperation on a number of promising projects in their regions of activity across Russia.

“Our task is to effectively bring into development the hydrocarbon reserves with complex geology that are located beyond the Arctic Circle. The joint efforts of the two companies will allow us to deploy the best technological solutions there. It should also be noted that the creation of the JV is facilitating further advancement of the strategic partnership between the Gazprom Group and LUKOIL,” said Alexey Miller.

“Development of the fields that are covered by our joint venture with LUKOIL is an important task at the level of the entire industry. In the joint venture, with our financial and technological resources united, we will work on the development of hard-to-recover reserves, including the production of oil from the Achimov sequence. In its turn, this will create new jobs and generate additional tax payments to budgets of all levels, and will also facilitate further technological development of our companies and the entire ecosystem of contractors and equipment manufacturers,” said Alexander Dyukov.

“Projects in Russia have always been and remain the top priority for LUKOIL, and we see a huge potential for this. The company is interested in increasing the amounts of investments both in hydrocarbon production and processing in our country. We actively develop new fields in Western Siberia, the Timano-Pechorskaya oil & gas province, the Caspian Sea, the Baltic Sea, and other Russian regions, and continue implementing targeted projects for advanced processing of oil at Russian refineries. Gazprom and Gazprom Neft have been our strategic partners for many years, and in cooperation with them we are able to bring together the best domestic technologies for the development of a new large-scale hydrocarbon production cluster in a region that is of key importance to us, i.e. in the Yamal-Nenets Autonomous Area. The development of the cluster will bring additional production of hydrocarbons along with tax revenues for the budget of Russia, a multiplicative effect for related industries,” said Vagit Alekperov.