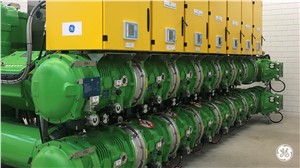 The project scope covers the design, engineering, delivery, and erection & commissioning of six bays of GE’s F-35-41g 145 kV g3 insulated switchgear and associated electrical balance of plant. This also represents the delivery of one of the most digitally advanced gas-insulated substations (GIS) in the world, with a GE digital solution that includes low power instrument transformers (LPIT) and GE’s BWatch, an online digital monitoring system to digitally transfer data via the IEC 61850 protocol.

“Our contract with Elvia demonstrates that utility operators are becoming increasingly aware of their environmental footprint and the impact it has on their community and the world around them. Today, 25 leading electrical utilities have already adopted GE’s g3 gas products for their high voltage networks, avoiding the addition of more than a million tons of CO2 equivalent to the grid. That’s the equivalent of removing almost half a million petrol cars from the road for one year,” said Espen Bostadlokken, Commercial Leader for the Nordics region at GE’s Grid Solutions.