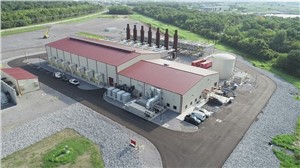 After Hurricane Ida’s path of destruction through Louisiana early last week, Wärtsilä engine technology in the New Orleans Power Station provided “a sign of hope” to the City of New Orleans.  Soon after the storm hit and a majority of southern Louisiana remained without power, the New Orleans Power Station was able to restart as the first local plant to go online in the New Orleans area after the storm cleared.Category 4 winds with gusts as high as 170 miles per hour knocked down power lines, which caused electricity outages to more than a million people in southern Louisiana. The damage to critical infrastructure forced those impacted to live without electricity or clean water in the middle of the hot and humid New Orleans summer. Utility crews continue this week to work around the clock to sort through the restoration process.

The City of New Orleans and Entergy, the utility for the City of New Orleans and Southern Louisiana, have been impacted by hurricanes in the past. Hurricanes such as Katrina, have influenced the planning process as well as the trajectory of energy-related technology. Incorporating reliable, resilient and flexible generation technology was a key factor in the decision for Entergy to install the New Orleans Power Station in 2020 with Wärtsilä reciprocating gas engines. The 128-megawatt power plant is powered by seven Wärtsilä 18V50SG engine generating sets. The choice of a flexible Wärtsilä gas power plant also enables Entergy New Orleans to utilize increasing levels of renewables efficiently within its system.

The attached image indicates the widespread outages in New Orleans in red and the early restoration progress in green as of Thursday morning 2 September.  Power was restored to critical infrastructure in New Orleans such hospitals, shelters and pumping stations thanks to the New Orleans Power Station. Reliability is built into the engine technology, but the infrastructure that surrounds the power generation equipment is another critical factor for resiliency. The New Orleans Power Station was built to withstand hurricane level winds and to protect the engines needed to provide power to recover quickly.

“As more extreme weather events have tested power systems across the country and around the world, Wärtsilä plants have remained intact. They can be restarted fast and efficiently after a major grid event.  These plants are typically supported by Wärtsilä’s field service engineers or directly through remote access centers operated by Wärtsilä 24 hours per day,” says Sushil Purohit, President, Wärtsilä Energy.

“Today the grid is being repaired and electricity continues to be restored throughout New Orleans and the rest of Southern Louisiana. The Entergy New Orleans Power Station and Wärtsilä technology were there to provide ‘first light’ after this devastating natural disaster,” says Deanna Rodriguez, President and CEO, Entergy New Orleans.