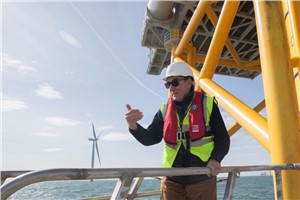 Iberdrola has continued its expansion in the Asia-Pacific region with the announcement of three new offshore wind development projects in Taiwan, with potential capacity of approximately 6 gigawatts (GW).

The projects are named Da-Chung Bu Offshore Wind, Guo-Feng Offshore Wind and Ju-Dao Offshore Wind and will be located in the county waters of Taichung, Changhua and Penghu on the west coast of Taiwan. Water depths are appropriate for both fixed bottom and floating offshore wind technology. With a total of approximately 6 GW, the projects provide a long-term pipeline for Iberdrola to establish itself in Taiwan and commit to a sustained operation in country.

David Rowland, Iberdrola's Global Offshore Wind Development Director, said: “Taiwan's ambition for significant growth in offshore wind means we have been monitoring the market closely for a number of years, and actively working to develop these new projects for over a year. It is a positive trend to see countries around the world are embracing the huge potential of offshore wind and looking to build quickly and at scale. It is good news for the climate crisis and for the economy.

“From the detailed studies we have already completed, and the knowledge we have built about the capabilities of the supply chain in Taiwan, we are enthusiastic about the potential of these new projects.”

Taiwan has a target to install an additional 9 GW of offshore wind by 2031, and 15 GW by 2035, and the government is currently in the process of finalising its next set of policy measures. Iberdrola's three development projects are primed for entry into the forthcoming 'Zonal Development' auction rounds.

The potential for floating offshore wind offers significant opportunity for continued growth beyond the existing and planned fixed-bottom projects. Iberdrola is planning to evaluate both fixed and floating opportunities within the country.

Committing to local communities and economic development
Iberdrola will now develop these projects continuing its track-record of community engagement and establishing relationships with local workforces and supply chain to ensure a sustainable and long-term collaboration. The company will establish a project office in Taipei.

Iberdrola has worked with local consultants to select the project areas, refining the boundaries through rigorous assessment of data and stakeholder engagement. Work will now continue to expand the stakeholder engagement effort and complete technical and environmental impact evaluations to ensure the projects continue to be developed with appropriate consideration of the local environment and communities.

Through the development of the projects in Taiwan, Iberdrola will work with the local supply chain and workforce to foster a long-term, sustainable offshore wind industry. Iberdrola has a strong-track record of delivering benefits and investing in the countries it operates within and will continue to adopt this approach as it develops projects in Taiwan.

One of the group's main growth drivers
The entry into Taiwan reinforces Iberdrola's diversification strategy aimed at being a global leader in offshore wind while consolidating its position as the world's largest renewable energy company.

Offshore wind is driving the group's growth: with 1,300 MW capacity installed - Wikinger, East Anglia ONE and West of Duddon Sands - and 2,600 MW under construction which will increase current capacity three-fold. Projects are being progressed and developed in the UK, United States, Germany, France, Sweden, Japan, Poland, Denmark, Taiwan and Ireland.

Green investments to promote economic recovery and jobs
For two decades, Iberdrola has been leading the energy transition, acting as a key driving force in the transformation of industries, the green recovery of the economy and job creation. To this end, the company has launched a record investment plan of €150 billion over the next decade - €75 billion by 2025. These plans will allow the company to triple its renewable capacity and double network assets, maximizing the opportunities of the energy revolution being delivered in the world's major economies.

Having invested €120 billion over the past twenty years, Iberdrola is a leader in renewable energy with over 35,000 MW installed capacity, a volume that makes its generation fleet one of the cleanest in the energy sector.

With emissions of 43 grCO2/kWh in Europe, two-thirds lower than the European average, the strategy of investing in clean energy and networks will allow Iberdrola to be "carbon neutral" in Europe by 2030.

Tell a friend:
Iberdrola Expands in Asia-Pacific With Development of 6 GW Pipeline in Taiwan