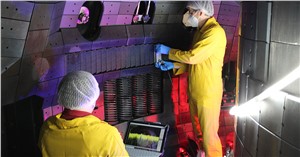 The DIII-D National Fusion Facility has inaugurated an innovative system that significantly improves its ability to create and sustain the physics conditions necessary for future fusion power plants. This new high-frequency radio-wave system was installed in DIII-D’s tokamak last year and has now been commissioned for operation.

The new “comb-line” traveling-wave antenna, paired with a 1-MW, 476-MHz microwave source and transmission lines, allows physicists to inject very high-powered “helicon” radio waves into DIII-D plasmas. This system drives an important process in the plasma that enables fusion reactions to occur much more efficiently. Efficiency improvements such as this are critical to developing economical fusion power plants.

“To achieve practical fusion energy, we need to continue improving the efficiency of the technologies that drive current in the plasma,” said General Atomics (GA) physicist Andrea Garofalo, who led the team that developed the helicon system. “Existing systems using neutral particle beams and electron cyclotron waves are important, but we need to go further.”

DIII-D is the largest magnetic fusion research facility in the United States and is operated by GA as a national user facility for the U.S. Department of Energy’s Office of Science. The heart of the facility is a tokamak that uses powerful electromagnets to produce a doughnut-shaped magnetic bottle for confining a fusion plasma. In DIII-D, plasma temperatures more than 10 times hotter than the Sun are routinely achieved. At such extremely high temperatures, hydrogen isotopes can fuse together and release energy. (See Fusion Energy 101 explainer, below, for more detail on how fusion works.)

To improve confinement and plasma stability even more, researchers have been investigating methods to supplement the bootstrap effect in strengthening the electrical current. These typically involve microwave radiation or high-powered particle beams. By contrast, the helicon approach uses a type of high-frequency radio waves.

The DIII-D helicon project has involved almost a decade of international collaboration since its inception in 2012. Following initial theoretical work by colleagues in Russia, GA researchers successfully tested a low-power (100-Watt) proof-of-concept helicon antenna in 2016. The success of the low-power antenna led to a new collaboration with the Institute of Plasma Physics, Chinese Academy of Sciences (ASIPP) in Hefei, China, to manufacture a high-power (up to 1 megawatt) antenna.

The high-power antenna required a new high-power radio frequency (RF) source behind it. Roughly equivalent to the combined output of a thousand household microwave ovens, this RF source, known as a klystron, was procured from the Stanford Linear Accelerator Center (SLAC) in Palo Alto via another innovative international collaboration, this time with the National Fusion Research Institute (NFRI) in Daejeon, South Korea. SLAC designed, built, and operated more than a dozen 1 MW klystrons at their facility for high-energy physics experiments during the 2000s. One of these klystrons was provided to DIII-D for the helicon system.

The novel traveling-wave antenna, the klystron, and the specialized RF transmission lines that connect them were recently conditioned for high-power operation. RF pulses on the order of 0.4–0.5 MW from the klystron were sent to the antenna in pulse lengths of one-half to two seconds. The total RF power radiated into the plasma was estimated to be 0.3 MW. With this system, experiments in the next DIII-D experimental campaign will attempt to increase the radiated power to 0.8 MW and evaluate the current-drive efficiency in advanced tokamak plasmas.

The DIII-D helicon system, and a similar system that was just commissioned on the KSTAR tokamak in Korea, are the first tests of helicon-wave current-drive in a high-performance tokamak. The DIII-D antenna has a significantly larger number of radiating elements (30) than previous antennas that have been tested on tokamaks (up to 12). Unlike typical tokamak antennas, it is not mounted within a port into the vacuum chamber but instead runs between ports around the inside of the torus. The designers of the DIII-D system took this approach as a model of what they believed to be a more fusion-reactor-relevant layout.

New and upgraded diagnostics aimed at measuring fluctuations near the helicon operating frequency were also tested during these pulses. Additional dedicated diagnostics will be installed this year. The new helicon system and the associated diagnostics will enable DIII-D researchers to develop the operational experience and physics basis that are necessary for modeling how high-efficiency helicon-wave current-drive will work in the advanced tokamaks that will power fusion power plants.

“DIII-D’s new helicon antenna will enable critical research into high-performance plasmas and the reactor-relevant conditions that will inform the design of future power plants,” said DIII-D Director Richard Buttery. “This is another example how DIII-D is committed to staying at the forefront of fusion science.”