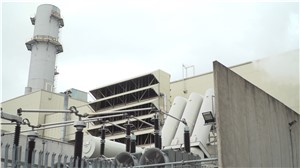 The 415MW (DC) Radian project in Texas and the 313 MW London, United Kingdom – July 20, 2021 – GE (NYSE: GE) today announced that it has completed the first implementation of its GT26 HE, the world's first High Efficiency (HE) upgrade for the GT26 fleet, at Uniper’s Enfield Power Station in north London. The upgrade was installed to improve the performance and extend the maintenance interval of the combined cycle plant. The successful campaign shows the upgrade exceeded the guaranteed performance values and met all other requirements. In addition to the confirmed capabilities of GE’s GT26 HE to deliver increased output, and efficiency, GE today announced new orders for the upgrade secured from Enel Argentina’s Central Dock Sud and Keppel Merlimau Cogen Pte Ltd (KMC), respectively in Argentina and in Singapore.

“GE has invested significantly in the development of this upgrade. We are excited that the GT26 gas turbine at Uniper’s Enfield site is the world’s first GT26 unit equipped with the HE upgrade to achieve H-class performance levels approaching 60% combined cycle efficiency, demonstrating the significant technological investment GE has made in this upgrade” said Amit Kulkarni, Head of Product Management for Heavy Duty Gas Turbines, GE Gas Power. “With the world shifting towards a lower carbon future, improving energy efficiency while increasing power output is a key way to generate more energy per unit of fuel with lower carbon emissions. This upgrade for a key Uniper facility, in addition to the cooperation agreement to decarbonize Uniper’s gas-fired power plants and storage facilities with GE technology, will enhance Uniper’s leading efforts to reduce the carbon footprint of their generation fleet. I’d expect this announcement will bring a positive disruptive influence in the power generation industry”.

“We were pleased to work with GE to enhance our Enfield plant’s competitiveness with the GT26HE upgrade. Increasing efficiency and output, whilst lowering carbon emissions, operational, and maintenance costs, is crucial for the long-term success of our fleet” said Simon Balmer, Operations Director, Gas Turbine Fleet, Uniper “As the first power producer to receive this technology,  checked the accuracy of the modelled configuration data compared to actual performance, and the results have confirmed that the upgrade has met the expected benefits in terms of performance and efficiency. This is a good example of the mutual value gained from our long term collaboration with GE”.

A specifically engineered instrumentation network collected data from selected components and systems of the gas turbine - compressor, combustor, turbine and cooling systems during the first implementation campaign. An extensive test campaign conducted with over 2000 sensors providing data to GE’s engineering team to confirm safe and reliable operation. Operability, combustion, aeromechanics and key engine parameters were all within GE´s engineering acceptance criteria and the unit was successfully released for commercial operation.

Latest Game Changer in Argentina and Singapore
Enel Argentina S.A.’s subsidiary Central Dock Sud S.A. (CDS) announced today to have selected GE’s GT26 HE upgrade solution to increase power output, efficiency and maintenance intervals as well as extend the lifetime of its 755 MW Dock Sud Power Station located in Buenos Aires, commercially operational since 2001. With the installation of the HE Upgrade on two GT26 units within the end of next year, the plant is expected to inject over 100 MW into the grid. The HE upgrade has been engineered to maintain the dual fuel capability ( diesel backup fuel in winter in case of natural gas shortage) and to allow for full retirement of the high-fogging system securing an additional 45 MW during summer, resulting in substantial cost savings.

Keppel Merlimau Cogen Pte Ltd (KMC) has selected the GT26 HE platform, for its combined cycle 1300 MW power plant in Jurong Island, Singapore. First in Singapore, KMC chose the advanced technology to upgrade its GT26 unit from F-class into H-class space.  The upgrade that includes additive manufactured parts, aerodynamics innovation, and material science and combustion dynamics will help increase efficiency and fuel savings leading to lower carbon footprint.  GT26 HE is expected to be installed in the second half of 2022.