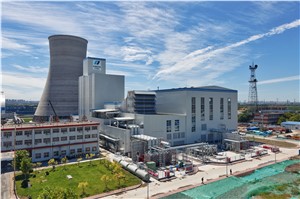 GE (NYSE: GE) today announced the start of commercial operation for Junliangcheng Power Plant in Tianjin City, mainland China.  GE provided the power generation equipment for the new combined heat and power (CHP) gas power plant that replaced the existing coal-fired power plant.  Today, the plant provides up to 661 megawatts (MW) of electricity, the equivalent output needed to heat and power approximately 100,000 homes in China living in an area of 7 million square meters. Following the coal-to-gas transition, Junliangcheng plant is expected to reduce sulfur dioxide (SO2) and NOx emissions by approximately 1,194 and 7,775 tons per year respectively.

“At China Huadian, we’re committed to accelerating the modernization of our power plant assets in alignment with China’s national emissions reduction goals” commented a representative of China Huadian Corporation. “Coal-to-gas switching is an effective and rapid method to reduce emissions and we are pleased to have selected GE’s highly efficient gas technology for this project. We have been working with GE since 2014 and we put our trust in GE’s record-setting HA technology.  We are sure our combined heat and power plant represents a best practice for modernization and transition of existing coal-fired power plants in the country”.

China‘s rapid economic and population growth, combined with its significant manufacturing industry and mass migration into centrally heated cities, have increased the country’s  demand for energy and heat. Recognizing the increase in power demand and the environmental challenges that are associated with its long-term reliance on coal, the Chinese government has announced their plan to reduce greenhouse gas emissions, confirmed by the recent pledge to have CO2 emissions peak before 2030 and achieve carbon neutrality before 2060.

Natural gas-fired generators have the lowest CO2 emissions of all fossil power generation fuels—a natural gas-fired combined cycle plant has roughly 50% of the CO2 emissions of a similarly-sized coal plant, and lower emissions levels for other pollutants such as mercury, NOx, SOx and particulate matter.  In addition, to further advance decarbonization utilizing gas power, GE’s H-Class gas turbine portfolio currently has the capability to burn up to 50% by volume of hydrogen when blended with natural gas—offering a future pathway for even lower or near-zero carbon operations.

The plant is powered by a world record setting technology.  In 2016, GE and EDF officially inaugurated the first ever combined-cycle power plant equipped with GE’s HA gas turbine in Bouchain, France. On that day, GE was also recognized for powering the world’s most efficient combined-cycle power plant by achieving at Bouchain something never seen before: converting fuel to electricity at a record 62.22 % efficiency rate.

Rooted in China for over 40 years, GE has been delivering innovative products and services that create significant value for our gas power generation customers to tackle energy transition challenge. GE Gas Power serves over 100 customers’ more than 200 fleets in China’s mainland, with an installed power capacity of 46 GW. In addition, GE announced a new order of three 9HA.02 gas turbines from a power plant in Guangdong province this year. The plant is expected to be operational in 2022, adding 2.4 GW of power, the equivalent electricity needed to power more than 4 million homes in the Greater Bay Area.