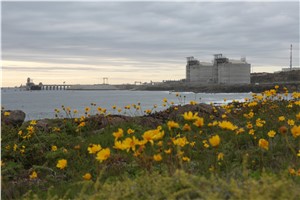 "We are excited to continue to help unlock North America's energy potential with ECA LNG Phase 1. This project would be the first LNG export facility on the Pacific Coast of North America that can help connect abundant natural gas supplies from Texas and the Western U.S. directly to markets in Mexico and countries across the Pacific Basin," said Justin Bird, CEO of Sempra LNG. "This important milestone is a testament to the resiliency of our team and marks the latest step toward our goal to be North America's premier LNG infrastructure company."

Estimated capital expenditures for ECA LNG Phase 1 are approximately $2 billion. Sempra expects to fund the project with a combination of equity contributions and debt. First LNG production from ECA LNG Phase 1 is expected in late 2024.

"As one of the largest private investments in the history of Baja California, ECA LNG's liquefaction-export project is expected to help support the Mexican economy through investment, tax revenue and jobs," said Tania Ortiz Mena, CEO of IEnova. "The project is also expected to positively impact the local community through social investment programs as well as help position Mexico as a key player in the global trade of natural gas."

ECA LNG Phase 1 will be built and operated by Sempra LNG and IEnova, Sempra Energy's subsidiary in Mexico, as a single-train liquefaction facility with a nameplate capacity of 3.25 million tonnes per annum (Mtpa) of LNG and an initial offtake capacity of approximately 2.5 Mtpa of LNG.

Exports of LNG from ECA LNG Phase 1 are expected to improve the trade balances of the U.S. and Mexico. Its construction is expected to create more than 10,000 direct and indirect jobs as a result of increased economic activity and social investments in both countries. Approximately 75 full-time jobs are expected to be added to the operations of ECA LNG.

ECA LNG has secured definitive 20-year sale and purchase agreements with Mitsui & Co., Ltd. and an affiliate of Total SE for the purchase of approximately 2.5 Mtpa of LNG from Phase 1 of the project. Additionally, ECA LNG and Total SE continue to work toward a potential equity investment in the project by Total SE.

In February, ECA LNG executed a lump-sum, turn-key engineering, procurement and construction contract with an affiliate of TechnipFMC plc for Phase 1 of the LNG export facility.

Sempra LNG is developing additional LNG export facilities on the Gulf Coast and Pacific Coast of North America, including a potential Phase 2 of the ECA LNG project. The successful development and ultimate construction of both phases of ECA LNG's project and Sempra Energy's other LNG export projects are subject to a number of risks and uncertainties and there can be no assurance that these projects will be completed.