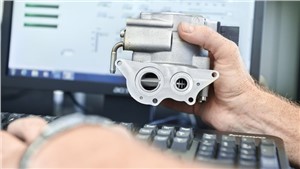 Rheinmetall Automotive’s contribution consists of an innovative hydrogen recirculation blower, whose development the German government is funding with a six-figure euro amount. Besides Rheinmetall, partners in this project of the German Ministry of Transport and NOW GmbH include BMW, the University of Siegen, and other supplier companies. Standing for “Nationale Organisation Wasserstoff- und Brennstoffzellentechnologie”, NOW GmbH is a state-owned company dedicated to promoting hydrogen and fuel cell technology.

The innovative new blower has the task of returning hydrogen not consumed during the reaction process in the fuel cell back to the stack. As a result, the blower increases the efficiency of the fuel cell while simultaneously extending its lifespan. In addition, the even distribution of hydrogen in the fuel cell results in improved cold start behavior. Low- and high-voltage variants of the blower were developed with up to 800 volts.

The development project aims to reduce the still-high cost of manufacturing of these systems by employing compact, reasonably priced components, coupled with high integration density. Fuel cells are to replace combustion engines in passenger cars without negatively affecting weight or installation space. With regard to roadworthiness, moreover, the complete fuel cell system is now undergoing multiple tests in actual vehicles. By no means least, these include crash tests as well as studies relating to the safe functioning of the hydrogen tank.

Underlying this project is the German government’s belief in the fundamental importance of battery- and fuel cell-powered electric vehicles in achieving the goal of sustainable mobility. “We’re seeing increasing interest on the part of almost every carmaker”, says Dr. Michael Becker, who heads Advanced Engineering at Rheinmetall Mechatronics and is in charge of coordinating the company’s fuel cell activities. “This is true of larger passenger cars and SUVs, but increasingly applies to commercial vehicles, busses and stationary applications, too.”