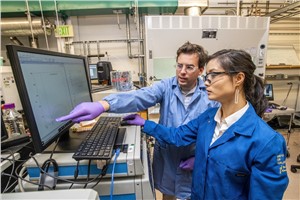 Hydrogen fuel cells are on the rise: Germany has rolled out hydrogen-powered trains, the San Francisco Bay Area will soon see the nation’s first hydrogen fuel cell ferry, and sales of fuel-cell vehicles are up globally. It’s a technology with the potential to provide a variety of clean energy options, especially in transportation.

Now the Department of Energy has announced several major investments to take hydrogen fuel cells to the next level, and Lawrence Berkeley National Laboratory (Berkeley Lab) is set to play a leading role in providing the scientific expertise to help realize DOE’s ambitious goals.

With funding of $112 million over five years from DOE, subject to appropriations, 10 DOE national labs have been selected to participate in two new consortia and a third continuing one to advance this clean energy technology, improving the durability, lifetime, and efficiency of fuel cells:

“At Berkeley Lab we are focused on renewable energy conversion technologies such as hydrogen; it’s complex and significant research that involves several of our scientific divisions and user facilities,” said Berkeley Lab Deputy Director for Research Horst Simon. “We believe hydrogen fuel cells are a promising technology for fleet and heavy-duty applications.”

“People have said the 2020s will be the decade of hydrogen. Worldwide you’re seeing an uptick, and it’s really taking off,” said Berkeley Lab scientist Adam Weber, who leads Berkeley Lab’s hydrogen and fuel cell efforts and is co-director of M2FCT. “These multi-lab consortia are effective vehicles to get people working together toward a common vision and really move the needle on the technology.”

Berkeley Lab has already been collaborating with several of the other labs for several years on related DOE hydrogen consortia, such as Hydrogen Materials – Advanced Research Consortium (HyMARC), which launched five years ago and is focused on hydrogen storage, as well as in two others that are winding up their work, the Fuel Cell Performance and Durability Consortium (FC-PAD) and HydroGEN 1.0. Collectively, these efforts, funded by DOE’s Hydrogen and Fuel Cell Technologies Office within the Office of Energy Efficiency & Renewable Energy, support EERE’s H2@Scale vision for affordable hydrogen production, distribution, storage, and utilization across multiple applications.

Hydrogen fuel cells generate electricity by chemical reaction, with hydrogen and oxygen as the inputs, and water being the only “waste” emission. However, to achieve greater adoption of this technology, DOE is seeking to make fuel cells more durable, efficient, and inexpensive, and also find ways to generate hydrogen that is less costly and polluting.

The goal of M2FCT is to enable widespread commercialization of fuel cells for heavy-duty transportation, with a 2030 goal of systems that have a 25,000-hour lifetime, or 1 million miles for long-haul trucks, by working with industry, academia, and national labs. With input from industry, DOE has also set cost and efficiency requirements.

Fuel cells could be especially conducive to heavy-duty and fleet operations in part because of the refueling infrastructure, Weber said. Fueling stations could be concentrated at fewer locations than would be needed for passenger vehicles, such as at the bus depot or along frequently traveled long-haul truck corridors.

Besides the environmental benefits, trucks powered by fuel cells would provide several benefits for the operator, such as more power, the ability to carry more cargo since hydrogen is a lighter fuel system than diesel, and the ability to bypass rules against idling, since the trucks would have zero emissions.

Weber says DOE’s goal is aggressive but achievable. “With the longer lifetime and needed efficiency improvements, higher temperature operation and previously ‘solved’ degradation issues become more important,” he said. “This will require a collective approach in the community to achieve, but I believe we have the right tools, partners, and approach in M2FCT.”

The H2NEW consortium is a comprehensive, concerted effort to come up with affordable, reliable, and efficient electrolyzers. Large-scale production of hydrogen by electrochemically splitting water into hydrogen and oxygen using electrolysis is key to realizing the H2@Scale vision. Berkeley Lab will be working on both high-temperature and low-temperature electrolysis technologies.

The goal of the consortium is not new materials discovery, but rather, addressing manufacturing and materials integration issues to meet cost, durability, and performance targets and also enable $2 per kilogram hydrogen. The current price for renewable-derived or green hydrogen is $5 to $15 per kilogram, depending on the cost of electricity, according to Strategic Analysis Inc. One kilogram of hydrogen is equivalent to the energy provided by 1 gallon of gas.

Both M2FCT and H2NEW will include participation by private industry. “We want to respond to industry needs, but using a more fundamental-to-applied science perspective so we can answer their questions in a very comprehensive manner,” Weber said.

The HydroGEN 2.0 consortium, as its name suggests, is the second phase of a consortium that was launched in 2017 to accelerate materials discovery for advanced water-splitting technologies for clean, sustainable hydrogen production. Berkeley Lab’s main focus is on photoelectrochemical (PEC) water splitting. Much of that research leveraged what came from the Joint Center for Artificial Photosynthesis at Berkeley Lab.

Fuel cell and hydrogen work at Berkeley Lab spans almost every scientific division and major scientific facility. The Advanced Light Source and Molecular Foundry are used to characterize materials at molecular, atomic, and nano scales; computing experts and facilities help to provide computational models of systems; biologists, chemists, materials scientists, and others work together on problems relating to splitting water and chemical synthesis.

“I’m not sure if I’ve ever come across a more complex system than a fuel cell or an electrolyzer. You have multiple phases, and you have phenomena that go across very different lengths and time scales, and it’s all occurring together,” Weber said. “It’s a microcosm of all the work we do at Berkeley Lab in one little device, which we’re trying to optimize.”