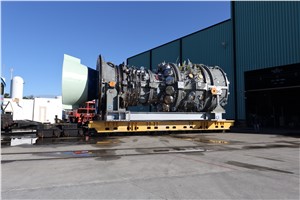 GE today announced it has secured an order to supply power generation equipment for a new generating block at JSC Tatenergo’s Zainskaya State District Power Plant (SDPP) located in Zainsk, Tatarstan Republic, Russia. The new combined cycle plant will be designed and built by the Turkish engineering, procurement, and construction (EPC) company ENKA, as part of the modernization project of one of the largest power plants in Tatarstan. GE will supply equipment for the project including GE’s most efficient gas turbine 9HA.02, as well as a STF-D650 steam turbine, one triple pressure with RH Heat Recovery Steam Generator and H78 and A78 generators.

Zainskaya SDPP was built in the 1960s and is one of the largest combined heat and power plants in Russia today, with a capacity of 2.2 GW. The plant connects Russia’s European energy system with the energy systems in the Urals and Siberia regions, and generates approximately 25% of the power consumed in Tatarstan, including the Republic’s capital city Kazan. Replacing some of the plant’s outdated steam units with the latest 9HA gas turbine technology will significantly increase the efficiency of the power plant, reduce the natural gas consumption and emissions, while also driving down the cost of electricity.

Rauzil Khaziev, General Director of Tatenergo: «The construction of Zainskaya SDPP was a landmark project for the country at the time. This power station was the largest in Russia and remains so to this day. Our aim is more than simply making the station reliable, as over the decades the reliability of the plant's equipment has never been called into question. Our mission is to make the plant efficient for energy consumers and for our company. The inclusion of the Zainskaya SDPP upgrade project in the national modernization program was possible thanks to the direct participation of President of Tatarstan Rustam Minnikhanov, as well as the support of country leader Vladimir Putin. This is further evidence of the vital role our largest power station plays in the country's energy system. So onto the task at hand - we must build the new power unit according to the planned schedule and ensure the quality of works and installation at all stages. From my perspective, it appears that we have every reason to believe we will accomplish this. All of the parties, from the equipment manufacturer and the general contractor through to the future operator, possess the necessary experience, expertise and resources».

Michael Rechsteiner, Vice President Europe, GE Gas Power commented: «We are pleased to participate alongside industry leaders Tatenergo and ENKA in the development of energy infrastructure in Tatarstan, one of Russia's most rapidly growing and technologically advanced areas. In recent years, GE has successfully implemented a range of complex energy projects in the region, and today the modernization of Zainskaya SDPP represents another opportunity to use our global experience and deep technological expertise to enhance the efficiency of Tatarstan's energy sector and, as a consequence improve quality of people’s lives.»

This agreement for the supply of equipment for the upgrade of Zainskaya SDPP is the latest milestone in the successful, long-term relationship between GE and Tatenergo. For several years GE’s 6F.03 gas turbines and advanced services have provided for high-efficiency operation of Kazan CHP-1 and CHP-2 power plants, which are among the most advanced power stations in Russia.