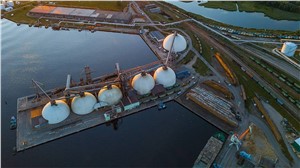 AGL Energy’s planned Westernport Bay gas terminal has attracted a record number of submissions, as concerns are raised about the potential impacts the development would have on local ecological systems.

AGL Energy is planning to build the Crib Point Jetty gas import terminal on the Victorian south coast, that would allow LNG to be transported directly to Victoria to be reprocessed into mains gas, and is intended as a potential solution to a forecast shortage of gas supply across Australia’s southern states.

Environmental groups have opposed the project, arguing that AGL Energy have overlooked viable alternatives to addressing the potential gas supply shortfall, including measures to reduce gas consumption, and that the development places internationally recognised wetlands at risk.

As part of the project, AGL Energy proposes to install a floating storage and regasification unit to receive gas imports which will be processed onshore at a proposed Crib Point Receiving Facility. The development is also set to include 57 kilometres of pipeline to link the gas import terminal and processing facilities to the mains gas network.

Once complete, AGL expects that the project could supply a further 160 petajoules of natural gas each year into the Victorian gas market.

To some extent, a proposal to build a gas import terminal in Victoria is an indication of how dysfunctional the Australian gas market is, as its was described by the ACCC. While Australia produces substantially more gas than is used domestically, Victoria is considering its options for purchasing more gas from overseas.

The ACCC recently found that Australian gas customers are paying more for Australian gas than overseas customers pay in the export market. The construction of an import terminal at Crib Point could see AGL Energy purchase gas from overseas suppliers, or even see gas supplied by Queensland producers delivered to Victorian customers via ship, rather than pipeline.

Environment Victoria cited the overwhelming response to the call for submissions, which saw more than 10,000 people submit responses, as a clear indication that the local community did not support the gas terminal.

The response set a new record for the number of submissions made in response to the Victorian Government’s Environment Effects Statement (EES) process, which is being overseen by a Inquiry and Advisory Committee appointed by the Victorian government.

“A major concern is gas supplied through the terminal would create up to eight million tonnes of carbon pollution, which is more than seven percent of Victoria’s current emissions.”

“Gas is a polluting and expensive fuel. A better alternative is reducing the amount of gas we use in households,” Dr Aberle added.

Even federal health minister Greg Hunt, who previously served as the federal environment minister, has called for the project to be halted while Victoria was under Covid-19 related restrictions.

The project’s Environment Effects Statement acknowledges that the project would have some impact on the local environment, including through the drawing in of seawater from the surrounding bay, and that contaminants, including chlorine, would be present in the seawater when it is later discharged by the gas project.

AGL downplayed the impact of such contamination, saying in the Environment Effects Statement that “this area comprises seabed that has previously been dredged and is regularly subject to sediment resuspension by propeller wash from existing shipping activities at the Crib Point Jetty.”

Local resident Candy Spender van Rood, who is a member of a Save Westernport organisation that has opposed the development of the gas terminal, said that residents fear that the development could lead to toxic pollution impacting the local environment.

“AGL’s gas plan threatens our Bay with toxic wastewater, and the risk of ships striking whales, or running aground and spilling diesel with catastrophic consequences. We won’t let that happen,” Spender van Rood said.

“They’ve treated the community with disrespect. AGL took a full two years to write its 11,000 page report on the environmental effects of its gas project. And then its CEO called for the approvals process to be fast-tracked. We had just forty days to have our say while under lockdown.”

The Inquiry and Advisory Committee will commence a public hearing to receive further feedback from community members in October.