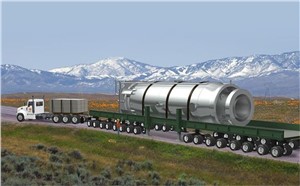 A typical nuclear power plant has an average life of 30-35 years and is licensed to operate up to 35 years. If licenses are not renewed, the nuclear plant will go through a decommissioning process which involves the disposal of radioactive wastes and dismantling of nuclear reactors. Nuclear power plant decommissioning has become a profitable business, and a majority of companies have started offering nuclear-decommissioning services. High capital costs associated with the development of traditional nuclear plants is a potential driver for small modular reactors.

Small modular nuclear reactors are one of the potential sources of CO2-free district heat production. In the last few years, small modular reactor (SMR) projects have been making substantial progress, with two reactors currently under construction: the CAREM-25 (a prototype) in Argentina and the KLT-40S in the Russian Federation. Interest in SMRs is being driven by a desire to reduce the total capital costs of nuclear power plants and to provide power to small grid systems, leading to more designs reaching advanced stages of development. The increasing energy demand globally, and especially in India and China, is also another parameter that boosts the market’s development and can augment its share in the global power generation mix.

Our report analyst commented "Small Modular Nuclear Reactor (SMR) market is expected to witness a high growth on owing to low investments costs when compared to traditional nuclear power plants. SMR’s are low-mid capital-intensive nuclear power plants, and hence, numerous companies are offering equipment and solutions related to the development/deployment of SMRs. From the second half of the current decade and beyond, new countries are anticipated to enter the market and complete their Small Modular Nuclear Reactor facilities."

Tell a friend:
The Small Modular Nuclear Reactor market is estimated at 888MW of capacity in 2020