Consortium announces oil and gas production start at P-68 FPSO located at BM-S-11-A concession in Berbigao, Sururu, and West Atapu; unit can process up to 150,000 barrels per day. 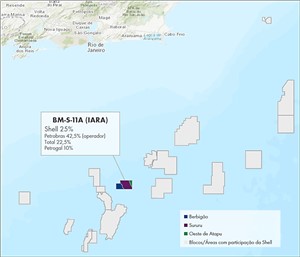 The FPSO can process up to 150,000 barrels of oil and 6 million cubic meters of natural gas daily. Operated by Petrobras, P-68 features ten producing wells and seven injection wells.

This new production at P-68 adds to Shell’s already prolific deep-water portfolio in Brazil. With the development in Iara, the company is opening a new production frontier in the Pre-Salt. This is also the first step in developing the large resource potential at Sururu.

“It has been a banner year for Shell Brasil,” said Wael Sawan, Shell’s Upstream Director. “From winning new acreage to setting records in drilling and production, the country continues to solidify its place as a heartland in our Upstream portfolio.”

“Brazil is home to some of the best deep-water opportunities in the world and we look forward to working with Petrobras and other partners to progress additional development plans,” he added.