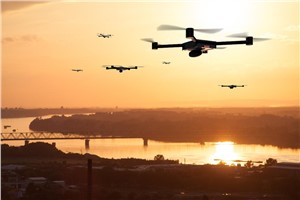 Two of the legal worlds that I straddle – energy and aviation – collided last week in the Mediterranean Sea. The implications for these two disciplines, as well as world security, could be enormous.

The nation of Cyprus deployed drones to monitor Turkish attempts to drill for natural gas in waters claimed by the divided nation. Turkey's action added to the tension in a region already roiling from the migrant problem, the recent Turkish invasion of Syria, and the overall Middle East uncertainty.

To understand the move by Cyprus, we must start with the fact that Turkey invaded Cyprus in 1974 and divided the island in half. Populated mostly by residents of Greek and Turkish ancestry, the island long had been dominated by the more populous Greeks. Most of the island nation, excluding the northern part described below, calls itself the Republic of Cyprus.

Since 1974, Turkey has occupied the northern part of the island, setting up its own rump state called the Turkish Republic of Northern Cyprus, or Northern Cyprus for short. Northern Cyprus is recognized as an independent country by only one nation - Turkey. The Republic of Cyprus continues to declare sovereignty over the disputed north.

The Turkish occupation of the northern half of Cyprus has long been an open sore in the permanently problematic relationship between Greece and Turkey, to say nothing of the internationally recognized nation of Cyprus. Since 2004, Cyprus has been a member of the European Union as a “de facto divided island.” The EU’s official position is that it “fully supports the current negotiations between the leaders of the Greek Cypriot and Turkish Cypriot communities which aim to reach a comprehensive settlement leading to the reunification of the island and establish a bi-zonal, bi-communal federation in which the communities would enjoy political equality.”

Add to this the coming to power, and the consolidation of power, of Turkish President Recep Tayyip Erdogan. Erdogan is the leader of the Justice and Development Party, known as the AKP. This is a Muslim fundamentalist party that has moved slowly but inexorably toward injecting religion into the secular Turkish state first created after World War I by Mustafa Ataturk. Long a western ally, Turkey in the Erdogan era is now a very different place whose commitment to western values has increasingly been questioned.

Within the last decade, massive natural gas deposits were found in the Mediterranean near the territorial waters of Cyprus, Greece and Israel, three countries from whom Erdogan purposely has distanced Turkey. Erdogan's mistrust was increased when these three reached agreements on the gas, including exploration, development, and the construction of a gas pipeline to Greece.

For Erdogan, this was too much. He sent the Turkish drilling ship Yaviz to drill for gas inside what Cyprus claims as block 7 of its exclusive economic zone. Cyprus previously had licensed this area to be explored for natural gas by Italy's Eni and France's Total.

Cyprus responded by purchasing sophisticated Israeli drones and deploying them to shadow the Yaviz. The introduction of the drones increases the risk of accident, raises the possibility in Turkish eyes that the drones might be used for offensive purposes, and adds yet another element of instability into the region.

In airport parlance, drones are known as "UAS's" (Unmanned Aircraft Systems). Their use is incredibly beneficial yet incredibly problematic, for the reasons shown by the Yaviz incident. Monitors are easy and cheap ways to keep "eyes in the sky", but as we saw in Saudi Arabia last month drones can be used for offensive military purposes. The aviation world is struggling mightily with the effects of drones, not sure how to balance the obvious benefits with the potential adverse impacts on world aviation.

Facing massive international pressure over his Syrian incursion, it remains to be seen how far Erdogan will be willing to go to prevent Cyprus, Israel and Greece from developing these Mediterranean gas fields. The failure of the West to stand up to his incursion in Syria may embolden him in other spheres. There is no way to tell. If he does become emboldened, it is not surprising that energy may provide the vehicle for Erdogan to do so. Regardless, we have likely not heard the last of the Mediterranean gas dispute. As with everything else in that region, what might be an economic boon capable of lifting the standard of living for millions could instead become a focal point for further international conflict. Such is the world in which we live.