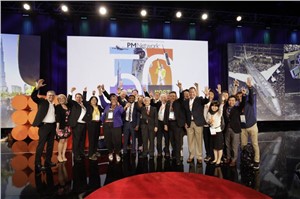 The technology group Wärtsilä has been recognised as having delivered one of the world’s Top Ten most influential renewable energy projects of the last 50 years. This recognition has been given by Project Management Institute (PMI), the world’s premier association of project professionals. It was announced on October 7 at PMI’s head office in Philadelphia, USA.

The Wärtsilä installation referred to by PMI is the KivuWatt power plant in Kibuye, Rwanda. The 25 MW plant was delivered and installed by Wärtsilä as a complete engineering, procurement, and construction (EPC) project in 2015. It operates using Wärtsilä 34SG engines running on methane gas lifted from the depths of Lake Kivu, known as the “killer lake” due to the large quantities of methane gas trapped under a layer of heavy water washed out of the nearby volcanoes.

In accepting the award, Antti Kämi, Vice President, Engine Power Plants, Wärtsilä Energy Business, said; “We are honoured to be awarded this prestigious recognition for our KivuWatt power plant project. The gas that can escape from the lake poses a threat to people living in the vicinity, so by utilising these natural resources we are not only adding much-needed electricity to the grid, but most importantly, we are increasing safety for the local community. This successful plant installation also highlights Wärtsilä’s competences in project management, as well as the technical efficiency and flexibility of our engines.”

The Most Influential Projects list is intended to identify efforts that have changed the world, and transformed an industry or culture in ways that continue to reverberate. More than a thousand projects were considered before the winners were announced.

Wärtsilä 34SG engine was chosen for this project because of its very high simple cycle efficiency, and the fact that it shows no derating at the installation altitude of 1500 metres above sea level. The engines used were optimised to run on Lake Kivu’s methane gas, which has a lower heating value than normal natural gas.

Wärtsilä has already equipped and/or built over 530 plants producing over 7.3 GW of power in 46 African countries and is playing a crucial role in the socio-economic development of the continent.