Land Seismic Equipment & Acquisition Market Will See a Capital Expenditure (CAPEX) of $2,405mn in 2019 As Demand for Oil and Gas Continues to Grow 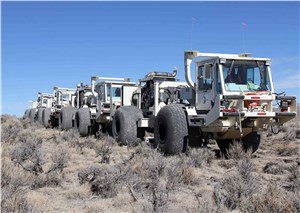 Land seismic operations are explorations for hydrocarbon resources onshore. Seismic surveys are carried out using waves of energy to help build up an image of an area and the resources beneath.

For E&P and mining industries, land seismic surveys are carried out to generate subsea bottom profiles. This type of surveying is conducted by generating mechanical sound waves that are sent into the earth. The energy reflected back from the earth is measured by recording sensors which are installed in mounted trucks which consist of tapes to record any activity. The land seismic operations require various equipment such as geophones, seismic sensors, streamers, hydrophones, air or water gun, streamers, and sub-bottom profilers.

Previously declining prices of oil & gas have resulted in cutting investments in the E&P oil & gas sector. This, in turn, resulted in land seismic acquisition companies making major cuts with regards to spending in order to remain profitable during this market downturn. However, due to the price recovery and stability seen in 2018, companies are more willing to expand operations once more.

The report analyst commented "Due to volatility in crude oil and natural gas prices, while oil prices were low, it forced companies to make serious cuts to their budgets and spending on land seismic equipment. However, developments in the industry along with increasing energy demand globally, as well as oil prices recovering and somewhat stable, this has once again encouraged companies to increase spending and encourage market growth."

Leading companies featured in the report who are involved in Land Seismic Equipment & Acquisition include Sa Exploration, Terraseis, Sercel, Terrex Seismic, WesternGeco, Mitcham Industries and others.

Tell a friend:
Land Seismic Equipment & Acquisition Market Will See a Capital Expenditure (CAPEX) of $2,405mn in 2019 As Demand for Oil and Gas Continues to Grow