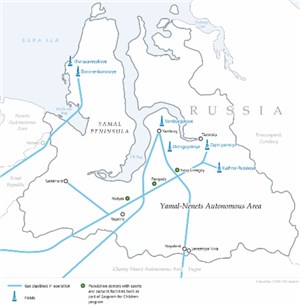 A working meeting between Alexey Miller, Chairman of the Gazprom Management Committee, and Dmitry Artyukhov, Governor of the Yamal-Nenets Autonomous Area (YaNAA), took place today at the Bovanenkovskoye field.

The parties expressed appreciation for the large-scale cooperation between Gazprom and the YaNAA. It was noted that the Company is rapidly developing the Yamal gas production center. In late 2018, the Bovanenkovskoye field, considered to be a top priority in the Yamal Peninsula, was brought to its design capacity of 115 billion cubic meters of gas per year. Today, the Company started the full-scale pre-development of the Kharasaveyskoye field.

It was stated Gazprom is the largest investor in the YaNAA. In 2013–2018, the capital investments of the Gazprom Group companies (excluding Gazprom Neft) in the build-up of the regional production capacities amounted to RUB 1.2 trillion. This year, the Group earmarked RUB 196.5 billion for the region.

Gazprom plays a crucial role in the socio-economic development of the YaNAA. The Company’s tax payments to the regional budget grew up to RUB 62.4 billion (versus RUB 55.1 billion in 2017) last year. The total amount of all payments made by Gazprom to the regional and local budgets of the Yamal-Nenets Autonomous Area (including, inter alia, subsidies for indigenous minorities of the North) reached RUB 71.3 billion.

Efforts are in progress to expand the gas supply infrastructure and the NGV refueling network in the YaNAA. In 2018, the Company completed the construction of a gas pipeline to the Severnaya Niva settlement and built a CNG filling station in Novy Urengoy. Another CNG filling station will be created in Noyabrsk.