Texas is the #1 wind energy generator in the country through decades of policy leadership. 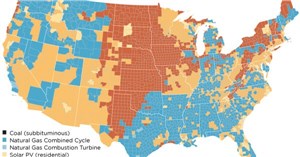 Today, Powering Texas announces the launch of a coalition and powerful voice to promote innovative, sustainable electricity generation throughout Texas, including the continued promotion of renewable wind energy. The organization will focus on educating Texans on wind energy in the state, from the policies that spurred immense growth in the industry to the resulting community investment, job creation and direct economic impact.

Texas has become the national leader for economic expansion, innovation, and sensible regulation. Thousands of people are moving from across the country and around the globe to experience the “Texas miracle” for themselves. Powered by decades of Texas leadership, wind has contributed to this boon through investment, manufacturing, and job creation.

As Texas grows, so does the state’s enormous demand for electricity. Texas is the number one energy consumer in the country, and our continued economic growth is dependent on reliable power. As part of a diverse portfolio, wind has helped keep the lights on during extreme demands on the Texas grid. Supplying nearly 15% of all Texas electricity in 2017, wind power is an important contributor to Texas’ electricity mix.

“Wind power has become an invaluable tool in the rural economic development space in Texas - creating jobs and generating revenue streams for rural Texans that strengthen our communities and provide needed economic opportunities for landowners and local school districts,” said Scott Dunaway, spokesperson for Powering Texas. “Powering Texas is advocating for the continued expansion of an electric generation fleet that reliably and sustainably powers Texans’ homes, businesses and communities for the future.”

As the number one wind energy producer in the country, Texas is a case study on how the industry can transform communities across the country. Through investments of more than $42 billion across the state, the wind industry is bringing benefits to Texas communities, including school districts, rural communities and the agriculture industry.

“The wind energy industry has proven time and again to be valuable in South Texas, from its investment in our schools and community to the creation of steady jobs around the area,” said Sergio Contreras, President and CEO of the Rio Grande Valley Partnership. “We’re proud to support wind power and its continued expansion here in the Valley and across the state.”