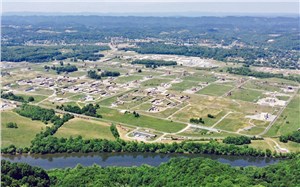 The construction of the natural gas facility is part of a long-term, U.S. Army-driven modernization requirement for the HSAAP installation, in part meant for more efficient energy production.

“The new natural gas-fired steam facility will be cleaner, more efficient and reduce emissions while providing a higher degree of reliability – all in support of our mission,” said Brian Gathright, vice president and general manager of Ordnance Systems at BAE Systems. “We are currently undertaking several major initiatives at Holston to modernize the installation’s operations and reduce environmental impacts. In partnership with the Army, BAE Systems is making these improvements as part of our commitment to the environment and to the health and safety of our employees and surrounding communities.”

BAE Systems has been the operating contractor of the Holston Army Ammunition Plant since 1999, developing a wide range of explosives for military and commercial applications. Since January 1999, BAE Systems Ordnance Systems business has provided modernization planning, project management, design, and construction at the Army munitions plant facilities it operates.

The estimated completion date is late 2021.