A spate of California bills spell opportunity for stationary fuel cells; and for one sector startup, Kenya beckons. 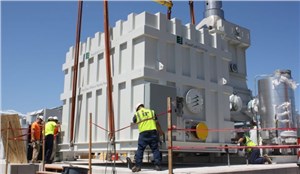 If high-temperature fuel cells grow into their long-promised potential and scale Wesoff’s Wall into profitable territory, future historians may well point to 2018 as the sector’s annus mirabilis.

Legislation passed this fall in California should provide further lift. SB 100 commits the state to 100 percent carbon-free electricity by 2045. Executive Order B-55-18 goes further, calling for the decarbonization of California’s economy by that date. SB 1369 includes green electrolytic hydrogen (hydrogen generated from electrolysis using carbon-free electricity) as a form of energy storage. And not to be forgotten, SB 700 extended funding for the SGIP, or Self-Generation Incentive Program, Bloom’s past leveraging of which has been the subject of controversy and criticism.

Molten carbon fuel cells such as those from FuelCell Energy require hydrocarbon fuel, but can operate on biomethane from agricultural wastes. And while the author has previously written about successful technologies going from hero to villain in the public eye, biomethane harvesting could improbably allow concentrated agricultural feedlot operations to execute a partial villain-to-hero transition. (Without minimizing the criticisms of such facilities, their high density of livestock should make recovery of those agricultural wastes — and hence biomethane — more economic than would be the possible for free-ranging or pastured livestock.)

Solid-oxide fuel cells such as those from Bloom Energy don’t generate byproduct hydrogen, but can use the gas as a fuel feedstock. This optionality should be useful in a decarbonized economy, where hydrogen electrolysis is expected to take the place of natural gas for seasonal storage and could help with grid balancing during periods of high renewables production. (California ISO's wholesale electricity prices were reportedly negative for 20 percent of the entire month of March 2017, and it remains to be seen whether storage and DERs will keep pace with renewables’ ever-ramping rollout.)

As for green hydrogen, electrolyzer prices have plummeted in recent years; one vendor estimated that its costs had halved since mid-decade, with further reductions of at least one-third coming by decade’s end. If achieved, this would amount to a two-thirds cost drop in five years. That said, for chemical process equipment such as electrolyzers, capital expenses are less of a barrier than are operating expenses. With larger deployments now in sight — a feasibility study began this year for an up-to-300-megawatt electrolyzer to export hydroelectricity-based hydrogen from British Columbia — the sector has redoubled efforts to improve its products’ efficiency.

As for seasonal energy storage, while infrastructure upgrades are likely necessary to distribute hydrogen, salt caverns currently used for natural-gas storage should be suitable. It’s true that hydrogen (H2) is a smaller molecule than methane (CH4), having a kinetic diameter of 290 picometers versus methane’s 380 pm. That said, helium is smaller still at 260 pm and is found in natural-gas deposits, which suggests that subterranean hydrogen storage should not be overly problematic.

In sum, the confluence of commitments from California provide the comprehensive policy support the hydrogen and fuel cell sectors have long sought. Execution remains key for industry players to land their perennial but long-postponed goals of profitability.

Also this summer, 80-employee Israeli fuel cell startup GenCell won a contract to deploy its GenCell A5 Off-Grid Power Solutions at 800 telecom base stations across Kenya. If successful, an enormous addressable market will open up; the telecom station industry group GSM Association estimates that by 2020 there will be 400,000 telecom stations with no grid access and a further 800,000 with poor grid access, serving 3.5 billion people.

GenCell’s alkaline fuel cells forgo platinum catalysts and run on hydrogen reformed from ammonia (NH3), a liquid carrier with high hydrogen content (18 percent by weight). As the second-highest-tonnage inorganic chemical produced around the world after sulfuric acid — both are used in fertilizers — ammonia is inexpensive and ubiquitous, but its most valuable property for GenCell’s early adopters may be that it isn’t widely used as a fuel.

Theft of diesel — whether from standalone generators, solar/diesel or solar/battery/diesel systems — is endemic in developing countries, and telecom station operators reportedly speak of the “1.3 rule”: For each gallon of diesel a base station requires, operators budget based on needing to purchase 1.3 gallons.

The risk and reality of theft raises the opex of diesel power; station operators favor smaller fuel tanks — less diesel can be siphoned from them — but these need to be refilled more frequently. Not needing to worry about theft, GenCell plans to drop a year’s worth of ammonia (roughly 12 tons) at a time. Its fuel cells also require far less maintenance than do diesel generators.

Perhaps the largest hurdle to commercialization for alkaline fuel cells since the Apollo missions has been the fact that carbon dioxide in the air poisons the liquid alkaline electrolyte (potassium hydroxide, KOH) by the formation of carbonic acid and then potassium carbonate salts. To prevent this from happening, GenCell uses a pair of adsorbent columns to scrub CO2 from inlet air. When the first column is saturated, the second is put into use. Hot gas — in GenCell’s case, fuel cell exhaust — is then passed through the saturated column; the heat causes the carbon dioxide to desorb (detach) from the adsorbent, regenerating it for use when the other column reaches saturation.

While solar-diesel hybrid power solutions have been developed for telecom base stations, GenCell does not currently offer renewables integration; this hasn’t been identified as a customer priority and would add complexity to its system. (For similar reasons, Bloom Energy has not actively pursued combined-heat-and-power options, although it does now offer solar-plus-storage integration.) With the company aiming to deliver ammonia-based power at the equivalent of $0.65/kWh, versus off-grid/poor-grid diesel power costs in the $1/kWh range, representatives gently suggest that communities deploy solar and storage for other economic ends, instead.

As it works to fulfill its 800-unit deployment in Kenya in the next few years, the company is in negotiations with additional, unnamed prospective clients for its promising power solutions.

Of course, as the fuel cell sector has perennially proven, engineering excellence is no substitute for execution, which will ultimately determine the number of telecom base stations and station operators GenCell can convince to “say no to diesel."