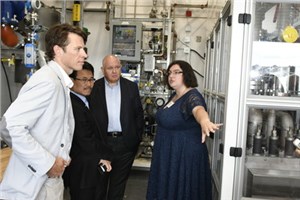 This facility features world-class technology developed and manufactured in Mississauga, Ontario by Hydrogenics and represents one of several projects selected by the Independent Electricity System Operator (IESO) of Ontario for energy storage to deliver power grid stability and reliability services. The site is owned and managed as a joint venture between Enbridge and Hydrogenics.

"I've worked in the energy sector my entire career and this is one of the most exciting projects in which I've ever been involved. I'm proud to see a Canadian company leveraging world-class Canadian technology to solve current energy challenges. Today is a major milestone for Enbridge and Ontario's energy sector."

"We are pleased that our strong relationship with Enbridge has resulted in successfully launching this ground-breaking Power-to-Gas facility in North America, where it will serve as another example of our advanced energy storage capabilities and provide the local IESO with a fast-responding resource to enhance the flexibility and reliability of operating the grid."