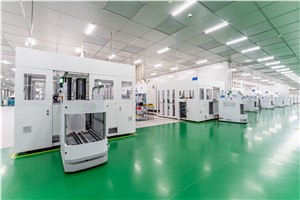 Trina Solar Co., Ltd. ("Trina Solar" or the "company"), a leading global PV and smart energy total solution provider, today announced that its 210mm n-type i-TOPCon cells have started rolling off the production line at its 8GW factory in Suqian, Jiangsu province. These n-type cells will be used to produce the new generation Vertex N modules, with power output up to 605W and efficiency reaching 22.4%. Full-scale production will guarantee delivery while improving all-round competitiveness and creating greater value for customers.

Construction of the 8GW 210mm n-type i-TOPCon cell factory in Suqian, which covers about 70,000 square meters, began in July, and manufacturing equipment was installed at the end of November. Trina Solar’s ability to have all of this up and running by December 30 demonstrates yet again the company’s operational agility. Highly advanced technology is being used on the production line, including in quality control.

As p-type PERC approaches its efficiency limits, it is critical that production of n-type cells, which began to be commercialized last year, be stepped up.

Trina Solar is well prepared for maintaining its technology leadership and achieving rapid capacity expansion. Seven years ago the company began to concentrate on developing n-type cell technology and built the utility-scale n-type empirical base in Menghe, Jiangsu province, in 2016. Additionally, the company delivered a total of 500MW i-TOPCon modules for two Top Runner projects in Tongchuan, Shaanxi province, and Changzhi, Shanxi province, in 2019, and established a pilot line of 500MW n-type i-TOPCon modules based on the 210mm product technology platform in 2021. The module capacity of Trina Solar’s 210mm n-type technology is expected to reach 30GW this year.

210mm technology leads the global application of 600W+ modules in the p-type era, becoming an industry-wide global trend. In the new n-type era, 210mm technology and n-type technology will work together to make the most of the advantages of the four keys that unlock low LCOE, namely high power, high efficiency, high energy yield and high reliability. In doing so, Trina Solar will maintain its leadership and meet increasing market demand for ultra-high performance PV modules.