We Will Invest More Than Eur 1.1 Bn to Build a Green Hydroge

We Will Invest More Than Eur 1.1 Bn to Build a Green Hydrogen Plant in Australia 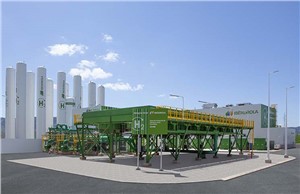 Iberdrola Australia and hydrogen developer ABEL Energy will build a green hydrogen and green methanol production plant at Bell Bay in northern Tasmania (Australia). The project, called Bell Bay Powerfuels, is backed by the Australian government and will involve an investment of €1.1 billion.

Bell Bay Powerfuels will produce 200,000 tonnes of green methanol per year in its first phase of development, rising to 300,000 tonnes in its second phase. This will make the project one of the largest in the world.

Green methanol will supply the shipping market as well as other applications. From 2021, the world's leading shipping companies are opting for large ships designed to run on ultra-clean-burning green methanol.

This decision has major benefits, such as eliminating air pollution in ports, avoiding environmental disasters due to oil spills in marine environments, and reducing greenhouse gas emissions currently generated by the use of fossil fuels.

The construction of the future plant, which combines investment in renewable generation with investment in green hydrogen capacity, and is characterised by a collaborative approach to creating long-term value for the Tasmanian community, will rely on the best technology in the world and will create 500 jobs. Of these, 200 direct and indirect jobs will be locally recruited.

"Iberdrola Australia's investment in the Bell Bay Powerfuels Project demonstrates our commitment to helping Australian businesses reduce their carbon emissions in sectors where historically, both technically and economically, it has been more difficult to make this transition. We are delighted to be able to combine Iberdrola's global expertise in green hydrogen technologies with ABEL Energy's local knowledge and commercial drive," says Ross Rolfe, CEO and Managing Director of Iberdrola Australia.

"Together with Iberdrola, we look forward to driving green hydrogen to commercial scale in Australia and establishing a new climate technology industry that will benefit the Tamar Valley community and its future generations. We are delighted to have Iberdrola's support as a financial partner and as an expert in building and operating large-scale renewable energy in Australia and around the world," says Michael van Baarle, co-founder and CEO of ABEL Energy.

Commitment to green hydrogen
Iberdrola is developing 60 renewable and green H2 initiatives in eight different countries. Its goal is to reach 35,000 tonnes of hydrogen per year by 2025 and more than 350,000 tonnes per year by 2030. To this end, the company has a project portfolio of 2,400 MW in different regions, mainly in Spain, the United States and Australia.

As it did with renewables 20 years ago, the company has become a 'first mover' in this new technological challenge that involves the production and supply of green hydrogen. Iberdrola is thus at the forefront of this new renewable revolution, supporting industry in reducing its polluting emissions.

The use of hydrogen should focus on applications where there are no other alternatives. That is, for the replacement of grey hydrogen (produced from fossil fuels) with green hydrogen (produced by renewables) in sectors where it is currently used, such as fertilisers, methanol or refineries.

Leader in Australia
Iberdrola has made a strong commitment to the Australian energy market from 2020 with the acquisition of Infigen Energy, Australia's leading renewable energy company. The company will invest between 2 and 3 billion euros in Australia with the aim of boosting the switch to renewables in the country and reaching 4,000 MW in the coming years.

The bid adds to the $2 billion invested by the company so far in projects such as the Avonlie solar farm and the Flyers Creek wind farm in New South Wales, and the Port Augusta renewable energy farm in South Australia, the largest hybrid wind-solar farm in the southern hemisphere.

Iberdrola acquired in the first half ot his year the rights to the world's largest wind farm at Mount James, with 1,000 MW, the 360 MW Broadsound photovoltaic plant in Queensland and has invested in a smart solutions business, Autonomous Energy, which offers tailored energy products for commercial and industrial companies.

The company has currently installed 1,122 MW of renewables (wind, solar and batteries). In addition, it is building two new facilities with a combined capacity of 391 MW, which are scheduled for commissioning in 2023.

Underlying all these investments is a commitment to put customers at the heart of the energy transition, providing them with reliable, affordable and environmentally friendly energy. Industrial customers served by the company include some of Australia's most iconic brands, such as mining company BHP and supermarket chain Woolworths.

Earlier this year, Iberdrola set up its networks business in Australia, as the country's electricity grids, mainly transmission infrastructure, will need to be dramatically expanded to capture wind and solar resources and transport power to coastal population centres. Federal and state government initiatives have created a climate of confidence for foreign investment to develop new renewable generation and transmission projects.

Tell a friend:
We Will Invest More Than Eur 1.1 Bn to Build a Green Hydrogen Plant in Australia