We Partner With AXA IM for Offshore Wind Energy Development 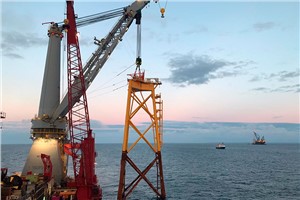 The Iberdrola group and AXA IM Alts today signed a Memorandum of Understanding to collaborate in the deployment of offshore wind energy in France. Under this agreement, the French firm will participate as a minority shareholder in the development of a 1000 wind farm  in Normandy, should Iberdrola be awarded the project in the auction in which it has already been shortlisted.

Bids for this tender, denominated AO4, will be sumitted on November 10 and the award is scheduled for the first quarter of 2023. The future site will be located more than 30 kilometers off the coast of Normandy, in an area with very favorable wind and seabed conditions for this technology.

With this transaction - subject to obtaining regulatory approvals - AXA IM Alts advances its strategy of generating sustainable value for its clients with a high commitment to social impact, values it fully shares with the Iberdrola Group. With €184 billion of assets under management, AXA IM Alts has a key presence in France.

In addition to this tender, Iberdrola has also been pre-qualified for the development of three other offshore wind energy projects each with a capacity of 250 MW. Two of them in the Gulf of León, in the waters of the Mediterranean Sea, which are expected to be awarded in the fall of 2023 and are scheduled for commissioning in 2030.

The third project the company is bidding for is France's future first floating offshore wind farm, to be built some 20 kilometers off Pointe des Poulains, a peninsula at the northwestern tip of Belle-Île in Brittany. The French government plans to designate the winner of the tender next spring, so that it can start operating in 2030.

2.5 billion investment in the Saint-Brieuc park
Iberdrola is currently completing the Saint-Brieuc wind farm, which will be the group's first large offshore wind farm in France. With almost 500 MW of capacity, it will generate enough clean energy to meet the electricity consumption of 835,000 people, once it enters into operation in 2023.

Located some 16 kilometers from the coast, it will cover an area of 75 square kilometers. Its construction involves an overall investment of around €2.5 billion.

This new facility demonstrates Iberdrola's commitment to the French market, where the company plans to invest some €4 billion by 2025, mainly in renewable projects.

The project involves the creation of more than 2,700 jobs, half of them in Galicia and Asturias thanks to Iberdrola's award of the largest offshore wind contract to date won by Navantia-Windar.

Offshore wind, key to Iberdrola's growth
The company also has three other large offshore wind farms currently under construction. In the UK, construction has begun on the East Anglia Three offshore wind farm, which will have a capacity of 1,400 megawatts (MW), enough to supply 1.3 million homes with clean energy, more than the populations of Liverpool and Glasgow combined.

This new facility, located off the coast of Norfolk, near the London metropolitan area, will form part of the East Anglia Hub macro-complex, together with the future East Anglia One North and East Anglia Two developments. This hub is the Iberdrola group's largest initiative of this technology in the world and will involve an investment of £6.5 billion (around 7.7 billion euros) for the installation of 3,000 MW.

In the United States, Iberdrola is building what will be the country's first commercial-scale wind farm, Vineyard Wind 1 (806 MW), off the coast of the state of Massachusetts, with an investment of around €2.5 billion. This facility will be able to meet the energy needs of more than 400,000 homes and will prevent the emission of more than 1.6 million tons of CO2 per year.

In Germany, the group has started to build its second major offshore wind initiative in the country, after Wikinger. The 476 MW wind farm, called Baltic Eagle, will be able to meet the demand of 475,000 homes and avoid the emission of almost one million tons of CO2 into the atmosphere each year. The company also plans to develop a third offshore project in this area: Windanker (300 MW).  Together, the three renewable facilities will give rise to the largest offshore wind complex in the Baltic Sea, with a total installed capacity of 1,100 MW and a combined investment of approximately €3.5 billion.

Offshore wind power is one of the keys to Iberdrola's growth. Just as the group was a pioneer in its commitment to onshore wind energy two decades ago, the company is leading the development of offshore wind power.

Iberdrola has a portfolio of projects in the United States, the United Kingdom, Germany, Poland, Sweden, Ireland, Taiwan, Japan, the Philippines and Brazil, which could increase in the coming years thanks to the numerous auctions in which it is participating.

Tell a friend:
We Partner With AXA IM for Offshore Wind Energy Development in France