We Successfully Supply Green Hydrogen to Caf in Zaragoza for 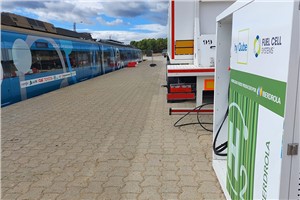 Iberdrola has successfully completed the supply of green hydrogen to CAF in Zaragoza for the on-track dynamic tests of the hydrogen-powered demonstrator train of the FCH2Rail project.

The solution for supplying hydrogen consisted of transporting it from Iberdrola's hydrogen plant in operation in Barcelona's Zona Franca, the first to be commissioned in Spain for commercial use, to Zaragoza, and the installation of a dispensing solution that allowed the train's tanks to be loaded with the greatest guarantees of operability and safety. This is the first time that green hydrogen has been refilled in a semi-trailer for distribution in a commercial hydrogen station of these characteristics.

These tests reaffirm the commitment of Iberdrola and CAF, which have formed an alliance to promote the use of green hydrogen in the railway sector and in passenger transport, born of the conviction of both companies to offer comprehensive sustainable mobility solutions, ranging from the supply of rolling stock and refuelling infrastructure to green hydrogen production plants and renewable energy infrastructures.

Aragon, a pole of sustainable innovation
Iberdrola's first supply of green hydrogen to CAF confirms Iberdrola's interest in driving the development chain in the region, as the company plans to supply green hydrogen to CAF for this project and others to be developed by other companies from the future hydrogen plant of the Green Mobility PLAZA project, in a region that is a pioneer in research thanks to the work of the Aragon Hydrogen Foundation.

Iberdrola is leading this project, which envisages the construction of a hydrogen plant at the PLAZA Logistics Platform in Zaragoza that will enable the production and supply of green hydrogen to road and rail transport and thus move towards increasingly sustainable mobility. The project, which continues to make progress in its search for European subsidies and is working on the consolidation of demand, already has land at an advanced stage of negotiation within PLAZA.

In addition, the hydrogen project is accompanied by an ultra-fast recharging station with 180 kW chargers that will allow two heavy electric vehicles or four light electric vehicles to be recharged which, due to the strategic location and the power considered, will be essential to promote the electrification of transport on the A-2 axis and will contribute to the decarbonisation of the Plaza Logistics Platform.

New technological challenge
In its commitment to leading the energy transition, Iberdrola is spearheading the development of green hydrogen with more than 60 projects to respond to the electrification and decarbonisation needs of sectors such as industry and heavy transport. It is thus at the forefront of the new technological challenge posed by the production and supply of hydrogen from 100% renewable energy sources in the electrolysis process.

The company is the first to make green hydrogen a reality and, in addition to the Barcelona facility commissioned in January, it has already inaugurated in Puertollano the largest green hydrogen plant for industrial use in Europe using 100% renewable electricity in the electrolysis process for the production of ammonia and green fertilisers at the Fertiberia plant in Puertollano (Ciudad Real), thus consolidating Iberdrola as a benchmark company in the application of this sustainable technology.

Tell a friend:
We Successfully Supply Green Hydrogen to Caf in Zaragoza for the Dynamic Tests of the FCH2RAIL Project Demonstrator Train