Iberdrola Advances its Photovoltaic Deployment in Portugal With a New Plant 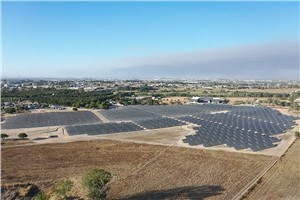 Iberdrola is making progress in its photovoltaic deployment in Portugal with the completion of the construction of the Conde plant, located in the municipality of Palmela, in the district of Setúbal (Lisbon region). With an installed capacity of 13.5 megawatts (MW), the plant will prevent the emission into the atmosphere of 6,000 tonnes of CO2 per year.

The installation has 25,000 solar modules that will produce enough clean, cheap and indigenous energy to cover the annual consumption of 5,000 households. The project, which has involved an investment of close to 11 million euros, has generated up to 100 jobs, mostly local.

This is the company's second photovoltaic installation in Portugal, after the 27 MW Algeruz II plant, which is already in operation following its commissioning last August in the district of Setúbal.

Both photovoltaic farms belong to the batch obtained by Iberdrola in the public auction held in 2019 by the Portuguese Ministry of the Environment and Energy Transition, through the Directorate General for Energy and Geology, and organised by the Operador do Mercado Ibérico de Energia (OMIP), in which the company was the largest successful bidder with a total of seven projects.

The Alcochete I and II solar power plants, which are currently under construction in the town of the same name, also belong to this batch. The work, which will be completed this year, will create up to 180 jobs. With a combined capacity of 45.6 MW, both projects involve an investment of 38 million euros.

These parks will have bifacial solar modules, which increase energy production by up to 30% compared to traditional panels because both sides of the panel are able to absorb the sun's energy. In addition, bifacial cells reduce the average cost of electricity by 16%.

The plants will also have a tracking system that allows the modules to move according to the path of the sun, thus maximising energy capture and extending the useful life of the plant, as it suffers less degradation. Thus, when they come into operation, Alcochete I and II will be able to supply enough green energy to meet the needs of 26,400 homes for a year, which is more than the total population of the municipality of Alcochete.

The batch obtained by Iberdrola is completed with the 36.5 MW Montechoro I and II projects in Paderne (Albufeira) and the 64 MW Carregado project in Alenquer (Lisbon), which is in the process of obtaining a construction permit. When all these facilities come into operation, Iberdrola will have 187 MW of photovoltaic capacity in Portugal.

More than 2,000 MW photovoltaic
The company is committed to becoming one of the main promoters of photovoltaic solar energy in Portugal, one of the most efficient technologies in the fight against climate change, capable of adapting to natural cycles and weather conditions to produce renewable, inexhaustible and competitive energy. Iberdrola has an extensive portfolio to develop 2,000 MW of photovoltaic power in different parts of the country in the coming years.

In addition, the group plans to build a wind power complex linked to the mega pumped-storage hydroelectric plant that the company has inaugurated in Alto Tâmega, in northern Portugal. These facilities will turn the complex into a hybrid generation plant and, with 400 MW of installed capacity, constitute one of the largest wind power projects in Portugal.

The Tâmega gigabattery, the largest clean energy initiative in the country's history, has three dams and three power plants (Gouvães, Daivões and Alto Tâmega) with a combined capacity of 1,158 MW and will be able to store the energy consumed by eleven million people a day in their homes.

Iberdrola already operates 92 MW of wind power in Portugal, spread over three wind farms: Catefica, in the municipality of Torres Vedras, with 18 MW; Alto do Monção, in Mortágua and Tondela, with 32 MW; and Serra do Alvão, in Ribeira de Pena, with 42 MW. Together, these plants produce 200 GWh per year, equivalent to the electricity used by 35,000 households.

The Iberdrola group began its commitment to renewable energies more than two decades ago as a fundamental pillar on which to build its clean, reliable and intelligent business model. Thanks to this vision, the company is spearheading the energy transition towards a low-emission economy and is today a world leader in renewable energies, with more than 39,000 MW of renewable capacity installed worldwide.

Tell a friend:
Iberdrola Advances its Photovoltaic Deployment in Portugal With a New Plant