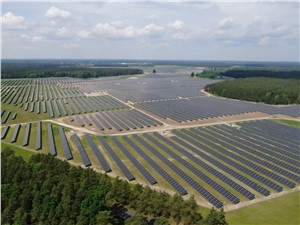 The ORLEN Group has completed a project to construct one of Poland’s largest solar PV farms, located near Wielbark (Province of Olsztyn). The 62 MW solar farm will operate at full capacity starting from the first quarter of 2023, generating clean energy for more than 30 thousand households.

We are completing another project undertaken to eventually end our dependence on fossil fuels and produce green energy. The solar PV technology, alongside wind power and SMRs, is a key pillar of our strategic development vision and a way of bolstering the country’s energy security. The project in Wielbark has brought the ORLEN Group’s total installed capacity in solar sources close to 100 MW. On the back of consistent investment we have made in recent years, in the second quarter of 2022 alone almost 60% of the 2.7 TWh of the ORLEN Group’s total energy output came from low- and zero-carbon sources – says Daniel Obajtek, CEO of PKN ORLEN.

Full capacity of the Wielbark farm will come on stream in the first quarter of 2023, once additional substations are developed to support grid connection capability and enable safe power evacuation. Currently, commercial production at the farm is being carried out from 12 MW panels connected to the grid at an earlier stage of the project.

The Wielbark farm comprises an array of about 140 thousand solar PV panels, with a unit capacity of up to 530 W, supported by 337 inverters. In order to construct the farm, the project owner needed to secure 56 permits and use nearly 2.5 thousand tonnes of steel. The farm was built over an area of 119 hectares, mostly low-grade agricultural land. The project owner is Energa Wytwarzanie, a subsidiary of Energa, part of the ORLEN Group.

The ORLEN Group’s strategy until 2030 is to steadily expand its low- and zero-carbon generation sources. By the end of this decade, the Group expects to have more than 2.5 GW in installed renewable capacity, of which about 0.7 GW is already in its portfolio. The largest project currently in the pipeline is Baltic Power, an offshore wind farm with a capacity of up to 1.2 GW, which will be capable of powering more than 1.5 million households from 2026 onwards.