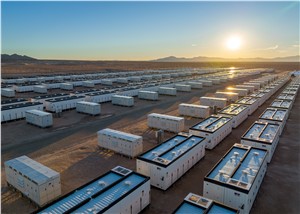 California Governor Gavin Newsom said, "The Crimson Energy Storage project epitomizes California leadership – clean energy, innovation, and economic development through good, union jobs. We've been laser focused on quickly bringing projects like this online to achieve our goal of a 100% clean energy grid. Congratulations to the people across the public and private sectors who are responsible for bringing this major project online to the benefit of all Californians."

Congressman Raul Ruiz, M.D., said, "In California's 36th District, we are national trailblazers in renewable energy development. With Recurrent Energy's Crimson Storage project here in Blythe, we will cement our leadership and create even more good-paying clean energy jobs. This project builds on the progress we're making locally to build our clean energy future, and I will continue working to strengthen our local economy, ensure good-paying union jobs, and achieve our nation's energy independence to help our communities thrive."

Crimson Storage will enable California customers to obtain more carbon-free energy and will ensure grid reliability during times of peak demand. On average, Crimson Storage will store and dispatch enough electricity to power more than 47,000 homes each year and will displace as much as 275,000 tons of carbon dioxide emissions and 47 tons of nitrogen oxides emissions annually, compared to generation by natural gas fired turbines. The carbon dioxide emissions reductions as a result of the projects are the equivalent of taking more than 53,000 cars off the road.

California Energy Commission Chair David Hochschild said, "Energy storage is an essential building block that supports our transition away from fossil fuels and the Crimson project represents a major milestone in the development of this essential clean energy resource."

JC Sandberg, Interim CEO, American Clean Power, added, "Californians recognize how important it is to accelerate deployment of clean energy—and build new storage facilities that allow communities to bring these resources online when they're most needed. California's clean energy industry is demonstrating its ability every day to achieve these goals at scale, and there's no doubt the state's electric system will be stronger, cleaner, and more reliable as a result of this project."

Crimson Storage is sited in the California desert on public lands about 13 miles west of Blythe, in Riverside County, California. In May 2021, the Bureau of Land Management (BLM) granted final approval of the project, making it the first standalone energy storage project to receive approval to site on BLM lands under the Biden-Harris Administration.

Thierry Vandal, President of Axium, said, "Axium is thrilled for the Crimson project to begin operations and support California's continuing renewable energy transition. The project is the second largest operating battery storage facility in the world and is providing reliability and flexible generation to the California electric grid. Projects such as Crimson are critical in facilitating the energy transition and we are pleased to have partnered with Recurrent and Canadian Solar on this landmark project."

Dr. Shawn Qu, Chairman and CEO of Canadian Solar, said, "Crimson Storage is now the largest single phase energy storage project to reach commercial operation in the world and the second largest operating standalone energy storage projects in the world. Recurrent Energy began developing Crimson Storage and our larger energy storage pipeline in 2015 when no large-scale storage projects yet existed. Last year, we started bringing these projects to fruition also thanks to our CSI Energy Storage team. Today we celebrate how far we have come in delivering the much-needed flexible generation that will support the U.S. and California's transformative climate goals. We thank the California Public Utilities Commission, the U.S. Department of the Interior and our partners at Axium Infrastructure for their critical contributions to this project."