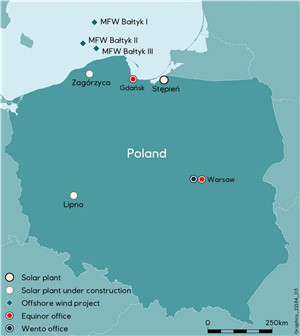 The construction of the 58 MW Stepien solar plant in Poland is completed, and the plant is ready for operation. Stepien was developed and will be operated by Wento, Equinor’s 100% subsidiary.

In 2021, Equinor bought the Polish solar developer Wento and its pipeline of solar projects across Poland. Less than 1.5 years after the acquisition, our first solar plant in Poland is ready for operation.

“With Wento, we are uniquely positioned to build a material solar portfolio in one of Europe’s most rapidly growing renewable energy markets. During the first year of our ownership, we sanctioned construction of three solar plants in Poland with a total capacity of 171 MW. Today, we are proud to inaugurate our first solar plant Stepien, while the two other plants are expected to be ready in 2023-2024”, says Olav Kolbeinstveit, senior vice president for power and markets within Renewables at Equinor.

Stepien is located in the Braniewo municipality, part of the Warmia region in the north of Poland. Being one of the largest solar plants in Poland to date, Stepien comprises more than 100,000 solar panels over an area of around 65 hectares.

It will produce 61 GWh of power per year, which is equivalent to electricity consumption of 31,000 Polish households. By using local contractors during construction and operation, the project contributes to building knowledge and skills within solar developments in the Polish supplier industry.

Poland’s energy production is still dominated by conventional sources, including a high share of coal. This creates significant potential and need for domestic renewables that will help to decarbonize the energy system.

Equinor plans to bring the electricity from the solar plant to the market through a power purchase agreement (PPA), thus securing predictable revenues and return on the investment for the plant. Equinor will include the electricity in its growing portfolio of power from renewables, capturing additional value from optimization and trading.