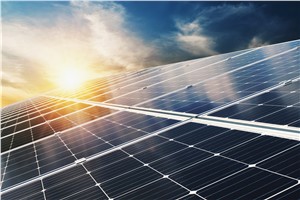 The agreement is the first for production from First Solar’s new manufacturing facility in Tamil Nadu, India, which is expected to be commissioned in the second half of 2023. Under the agreement, Azure is expected to take delivery of First Solar’s Series 7 photovoltaic (PV) solar modules from the fourth quarter of 2023 to 2025.

“We are pleased to partner with First Solar with their latest Series 7. Having a long-term agreement with global solar modules technology leaders like First Solar is key to de-risking our supply side with the latest technology available in the market,” said Rupesh Agarwal, acting chief executive officer, Azure Power.

First Solar’s vertically integrated manufacturing facility, located near Chennai, is projected to have an annual nameplate capacity of 3.3 GWDC and is expected to produce a version of the company’s Series 7 modules that is optimized for the Indian market. Unique among the world’s ten largest solar manufacturers for being the only US-headquartered company, First Solar produces its thin film PV modules using a fully integrated, continuous process under one roof.

“Our relationship with Azure Power goes back over a decade and we are pleased that it is the launch customer for a product that has not only been designed for India, but made in India, for India,” said Georges Antoun, chief commercial officer, First Solar. “This deal demonstrates how experienced developers and independent power producers in India are increasingly taking a strategic view on procurement and securing long-term commitments that help tackle the risks of short-term pricing and supply volatility. When working with First Solar, they benefit from certainty of pricing and supply, and a technology that is advantaged in India’s operating environments.”

Designed and developed at its research and development (R&D) centers in the United States, First Solar’s responsibly produced advanced thin film PV modules set industry benchmarks for quality, durability, reliability, design, and environmental performance. The modules have a carbon footprint that is 2.5 times lower and a water footprint that is three times lower than the average crystalline silicon solar panel made with cells produced in China. Additionally, First Solar is the only company among the ten largest solar manufacturers globally to be a member of the Responsible Business Alliance (RBA), the world’s largest industry coalition dedicated to supporting the rights and well-being of workers and communities in the global supply chain.