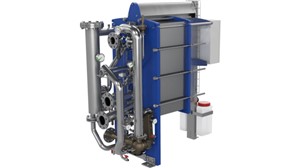 “The AQUA Blue E2 has all the strengths of the AQUA Blue E1, including AQUA plates with non-glued gaskets,” says Alfa Laval’s Serdar Sengun, Head of Marine Heat Transfer. “By having two stages, it takes the green benefits even further. Shipowners can get twice the fresh water out for the energy put in, or they can use the added efficiency to save in other ways.”

Support for multiple green scenarios
As shipowners move to decarbonize, the two-stage AQUA Blue E2 can support their goals. Doubled capacity compared to the single-stage model can meet an increased need for fresh water, e.g. in connection with alternative fuels. Conversely, it can meet the existing need for fresh water with around half the waste heat input.

Saved waste heat can be used to generate electricity when the Alfa Laval E-PowerPack is also installed on board. But using less heat to produce fresh water can also help meet sustainability requirements. Vessels that must slow steam due to their Carbon Intensity Indicator (CII) or Energy Efficiency Existing Ship Index (EEXI) can retain their production of fresh water with the limited waste heat available.

“Other two-stage freshwater generators can manage these scenarios, but none can do it with the same high efficiency as the AQUA Blue E2,” says Sengun. “That’s because AQUA plate technology uses just half the seawater and electrical power compared to other desalination methods.”

Saving space and time ­as well
Despite its wide capacity range, the AQUA Blue E2 handles the entire desalination process within a single plate pack. As with other AQUA Blue models, this creates installation advantages through a small footprint and limited pipework. Non-glued gaskets, which were introduced with the AQUA Blue E1, allow easy maintenance on board.

“The AQUA Blue E2 is a product of superlatives,” says Sengun. “Vessels can produce fresh water of the highest quality with minimal space and effort – and with the greatest energy efficiency.”