Iberdrola to Commission 1,400 New MW of Solar Power in Spain

Iberdrola to Commission 1,400 New MW of Solar Power in Spain 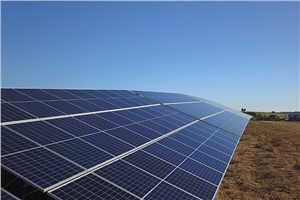 Iberdrola is consolidating its position as the leading promoter of photovoltaic solar energy, one of the most efficient technologies in the fight against climate change. The company's commitment to the development of this renewable source will allow it to add 1,400 new solar megawatts (MW) in Spain in the coming months.

The company is currently executing 12 photovoltaic projects, with a combined installed capacity of 550 MW, half of them located in Extremadura, where Iberdrola is building the Almaraz I and II plants (80 MW), which will be connected to the grid this year, and the Tagus complex in Alcántara, comprising four plants with a total capacity of 200 MW.

The company is also building six other facilities in Castilla y León and Andalusia using this technology, totalling 271 MW. These are the Villarino plant (50 MW) in Salamanca; the Guillena project (144 MW) in Seville; Cespedera (27 MW) in Cadiz; and Virgen de Aremos III (50 MW) in Palencia.

In addition, Iberdrola plans to start construction this year on another six projects that will provide 873 MW of new solar power in four autonomous communities: Ciudad Rodrigo (318 MW) in Salamanca; Fuentes (50 MW), Valbuena (50 MW) and Manantiales (30 MW) in Guadalajara; Peñarrubia (50 MW) in Murcia; and Cedillo (375 MW) in Cáceres.

Iberdrola ended the first half of the year with more than 2,200 MW of photovoltaic power installed in Spain, 800 MW more than the same period last year, representing an increase of more than 55% in the period.

The new capacity has allowed the company to increase its solar production in the country by 125% up to June, to 1,067 GWh. An amount that would have required some 184 million cubic metres of gas to be generated by a combined cycle.

Spain's drive has enabled the group to increase its global installed capacity in this technology by 56% - which has reached 3,448 MW - and to reach a total production of 1 .870 GWh (the same amount of energy as that generated by more than 320 million cubic metres of gas).

These figures confirm the company's firm commitment to this renewable, inexhaustible and non-polluting energy source, capable of adapting to natural cycles and weather conditions, which offers the advantage of allowing production through both commercial-scale plants and small self-consumption facilities.

Among the projects commissioned so far this year is the Francisco Pizarro project which, with 590 MW of power, is the largest photovoltaic plant in Europe and the Iberdrola group's largest plant of this type in the world. Made up of 1.5 million photovoltaic modules, it will generate enough clean energy to supply more than 334,000 homes and prevent the emission of 140,000 tonnes of CO2 into the atmosphere per year.

Mention should also be made of the Romeral and Olmedilla plants in Cuenca, each with 50 MW, which will produce clean energy for a population equivalent to more than 24,500 households/year, and close to 30,000 households/year, respectively. In addition to these plants, Iberdrola will start production with 100 MW of photovoltaic power at Puertollano, in Ciudad Real, where Iberdrola has the largest green hydrogen plant for industrial use in Europe, and the Revilla-Vallejera plant in Burgos, the first photovoltaic project promoted and developed by the company in Castilla y León, with 50 MW of power.

The Iberdrola group began its commitment to renewable energies more than two decades ago as a fundamental pillar on which to build its clean, reliable and intelligent business model. Thanks to this vision, the company is today a world leader in renewable energies, with 38,000 MW of renewable capacity installed worldwide - 19,370 MW in Spain - at the end of the first half of 2022, and is a leader in the energy transition towards a low-emission economy.

Tell a friend:
Iberdrola to Commission 1,400 New MW of Solar Power in Spain