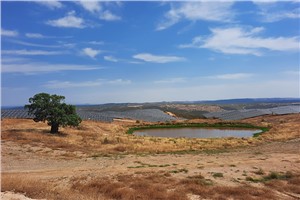 Iberdrola has started to commission two new photovoltaic plants in Extremadura. These facilities, called Majada Alta and San Antonio, are located in the Cáceres town of Cedillo and have a combined capacity of 100 megawatts (MW), enough to supply clean energy to 45,000 households, more than the population of a town like Plasencia.

Together, these installations consist of around 250,000 solar panels that will produce 156,000 MWh of electricity per year. An amount that would have required more than 26 million cubic metres of gas to be generated by a combined cycle. The plants will avoid the emission into the atmosphere of 28,000 tonnes of CO2 per year. Their construction has led to the creation of more than 300 local jobs.

With their commissioning, Iberdrola now operates twenty renewable energy facilities in Extremadura, where it currently has 3,867 MW of installed green power, 47% of which corresponds to the 12 solar plants that the company has in operation in the region.

The construction of this project has been a major technological and logistical challenge to ensure the minimum environmental impact on the surroundings of the Tagus International Natural Park, a protected area between Spain and Portugal. The company has undertaken a complex solution to jointly evacuate the energy produced by these photovoltaic plants and the almost 500 MW hydroelectric plant also located in the municipality.

To avoid using large areas of land, the company has installed an encapsulated substation of only 300 m2, compared to the 10,000 m2 of land usually required for infrastructures of this type. Manufactured in Italy, it had to be transported by ship from Venice to Seville along the waters of the Guadalquivir and, from there, it travelled through Andalusia and Extremadura in large lorries.

The substation was inserted in containers placed on a six-metre-deep structure, through which all the cables that distribute the power to the grid are connected. Each of these containers weighs more than 50 tonnes and large overhead cranes were needed to position them without interfering with the four evacuation lines of the hydroelectric power plant.

This innovative infrastructure will also serve a third 375 MW photovoltaic plant, which will avoid the installation of new evacuation networks, promoting environmental protection and integration into the territory. This facility - backed by the town council and the Cedillo Agrarian Society - is currently being processed by the Ministry for Ecological Transition and the Demographic Challenge. The plant will be located on a communal farm owned by a large part of the residents of Cedillo, who will be able to continue their livestock farming activities.

Coexistence with the rural environment and heritage
During the construction of these two new photovoltaic plants, Iberdrola has demonstrated its commitment to the environment and its respect for historical and cultural heritage, after locating important archaeological finds in the vicinity of the project during the preliminary land clearing work.

Specifically, a dolmen was discovered, which is between 3,500 and 4,000 years old, and a pre-Romanesque necropolis from the 5th century with 32 tombs, which has been made available to the Junta de Extremadura after the cataloguing and documentation work.

Iberdrola also discovered a funerary stele that has been transferred to the Provincial Museum of Cáceres. The company is working with the authorities on the possibility of turning these findings into a point of tourist interest.

As part of Iberdrola's commitment to contribute to the development of this town, the company plans to install the first solar community in Spain for an entire village in Cedillo. Thanks to this initiative, all the inhabitants of the municipality will enjoy a 50% saving on their electricity bills. Iberdrola will assume the total investment for the assembly and management of this collective self-consumption system, which will be put into operation at the beginning of 2023.

10,000 new MW in Spain by 2030
Extremadura is one of Europe's richest regions in terms of natural resources and a key location for the development of solar energy. The region has become the spearhead of Iberdrola's commitment to boosting renewables in Spain. The company's investment plan foresees the installation of 10,000 new MW in the country by 2030. A development in which the Extremadura region is playing a key role.

In the 2020-2025 period alone, Iberdrola will have installed more than 2,800 MW of renewable energy in Extremadura, with an investment of more than 1,700 million euros and the creation of some 7,400 jobs over the five-year period.

The Iberdrola group began its commitment to renewable energies more than two decades ago as a fundamental pillar on which to build its clean, reliable and intelligent business model. Thanks to this vision, the company is today a world leader in renewable energies, with 38,000 MW of renewable capacity installed worldwide - 19,370 MW in Spain - at the end of the first half of 2022, and is a leader in the energy transition towards a low-emission economy.