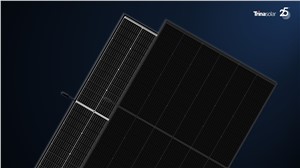 Trina Solar Co., Ltd. ("Trina Solar" or the "company"), a leading global PV and smart energy total solution provider, is delighted to introduce a new product generation to European rooftops. The company has announced the arrival of the upgraded Vertex S, which will shortly be followed by the Vertex S Full Black. Soon, both will be available via Trina Solar distribution partners across Europe.

Better, more efficient rooftop solutions with an award-winning design
The company has worked to quickly get its new generation of rooftop modules into the hands of an eager market. The Vertex S outperforms similar products on the market through innovative 210R rectangular silicon wafer and cell technology as well as optimized module design. The result is more power and higher efficiency to meet growing electricity demands in Europe and around the globe.

Trina Solar’s proprietary technology increases installation capacity on residential rooftops by as much as 5-7%. Single-module power increases by up to 30W, bringing the Vertex S modules up to 430W. Conversion efficiency has also improved across the line, now reaching 21.5%.

The Vertex S Full Black adds an elegant and advanced all-black design to these improvements in performance. It adopts black cells with ultra-fine busbars and other black components to create a visually appealing product that is at once modern and classic.

Trina Solar further spiked demand when it won the Red Dot Product Design Award 2022. The Vertex S Full Black beat out thousands of entries from companies in more than 60 countries for the honor. This international industrial design award has been colloquially named the “Oscar” of the design world after the famous film awards in Hollywood. The advanced design concept and exceptional user experience of the Vertex S made Trina Solar the first major solar PV module manufacturer from China to be awarded the Red Dot.

Products suited to European needs and markets
The trend toward renewable energy as an economic and ecological imperative is global and unstoppable. In addition, a growing amount of legislation across European countries now calls for the mandatory inclusion of solar PV on new builds, particularly in the commercial and public sectors. More and more builders will need to adopt solutions that meet compliance.

Trina Solar is well equipped to meet emerging needs. According to the company’s Head of Europe, Gonzalo de la Viña, “The rooftop market in Europe is showing strong growth. There is an enormous untapped potential in European rooftops, both on residential buildings and on commercial & industrial buildings. We have the right products specifically for this important segment. Our reputation for practical innovation and long investment in Europe perfectly position us to serve this community.“

A trusted partner in Europe’s quest for energy independence
Trina Solar continues to demonstrate its strong commitment to the region. Its team is excited to bring the latest models to an extensive network of qualified distribution partners in Europe. As the company celebrates its 25th anniversary, it anticipates a bright future in Europe and around the world.