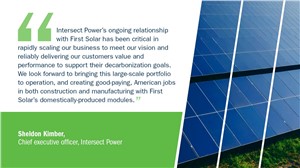 US-headquartered First Solar, Inc. (Nasdaq: FSLR) announced that it has entered into an agreement to supply 2.4 gigawatts (GW)DC of its high-performance, advanced thin film photovoltaic (PV) solar modules to Intersect Power, LLC (“Intersect Power”). The modules are scheduled to be delivered from 2024 to 2026, making Intersect Power, which previously placed orders for a total of 4.1 GWDC, in 2019 and 2021, one of the world’s largest buyers and operators of First Solar’s responsibly-produced module technology with approximately 6.4 GWDC expected to be deployed by 2027.

The modules will be deployed in Intersect Power’s solar, storage, and green hydrogen projects coming online across the United States in 2025 through 2027. A large proportion of the modules are expected to be produced in First Solar’s Northwest Ohio manufacturing complex.

“Intersect Power’s ongoing relationship with First Solar has been critical in rapidly scaling our business to meet our vision and reliably delivering our customers value and performance to support their decarbonization goals,” said Sheldon Kimber, chief executive officer, Intersect Power. “We look forward to bringing this large-scale portfolio to operation, and creating good-paying, American jobs in both construction and manufacturing with First Solar’s domestically-produced modules.”

Designed and developed at its research and development (R&D) centers in California and Ohio, First Solar’s responsibly produced advanced thin film PV modules set industry benchmarks for quality, durability, reliability, design, and environmental performance. The modules have a carbon footprint that is 2.5 times lower and a water footprint that is three times lower than the average crystalline silicon solar panel made with cells produced in China. First Solar also operates an advanced high-value recycling program, which recovers approximately 90 percent of Cadmium Telluride (CadTel) semiconductor material which can be used to manufacture new modules, as well as other materials including aluminum, glass, and laminates. The company currently operates commercial recycling facilities in the US, Germany, Malaysia, and Vietnam. Additionally, First Solar is the only company among the ten largest solar manufacturers globally to be a member of the Responsible Business Alliance (RBA), the world’s largest industry coalition dedicated to supporting the rights and well-being of workers and communities in the global supply chain.

“Intersect Power sets an important example by maximizing the impact of its investments on the US economy without compromising on competitiveness,” said Georges Antoun, chief commercial officer, First Solar. “By powering its growth with American solar, Intersect Power is directly supporting US manufacturing and jobs and enabling a durable domestic supply chain. It is also demonstrating the ability of American solar technology not just to compete, but to help drive our country’s transition to a sustainable energy future.”

First Solar is investing $680 million in expanding America’s domestic PV solar manufacturing capacity by 3.3 GW annually, by building its third US manufacturing facility, in Lake Township, Ohio. The new facility is expected to be commissioned in the first half of 2023 and when fully operational will scale the company’s Northwest Ohio footprint to a total annual capacity of 6 GW, which is believed to make it the largest fully vertically integrated solar manufacturing complex outside of China. First Solar has invested over $2 billion in its US manufacturing footprint and, when its third factory is fully operational, will directly employ over 2,500 people in Ohio, while supporting an estimated 15,000 indirect jobs through its American supply chain.

In addition to its Ohio manufacturing facilities, First Solar also operates factories in Vietnam and Malaysia, and is building a new 3.3 GW factory in India that is expected to be commissioned in the second half of 2023. With First Solar’s expansion in the United States and India and optimization of its existing fleet, the company anticipates that its nameplate manufacturing capacity will double to 16 GW in 2024. First Solar is the only US-headquartered company among the world’s ten largest solar manufacturers.