PepsiCo Teams Up With Iberdrola to Drive Green Electricity a

he clean energy will come from the Francisco Pizarro photovoltaic plant that Iberdrola is building in Caceres (Extremadura). he initiative guarantees the supply of renewable electricity for 11 plants, facilities, logistics and distribution centres of the multinational beverage company. 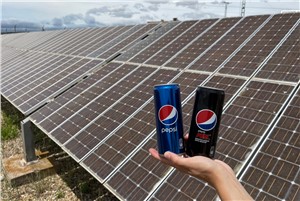 Iberdrola and PepsiCo have joined forces in their commitment to energy transition and sustainability with the signing of a long-term Power Purchase Agreement (PPA), under which the electricity company will supply 100% renewable electricity to all the beverage and food multinational's centres in Spain and Portugal. It will come into force on 1 January 2023.

Specifically, Iberdrola will supply green energy to 11 PepsiCo facilities. These include the production plants in Spain (beverages in Álava, snacks in Burgos and gazpacho Alvalle in Murcia) and another snacks plant in Carregado (Portugal). Also included in the agreement are the two large logistics centres in Burgos and Valencia, as well as sales offices in Vitoria, Pamplona, Palma de Mallorca and offices in Vitoria and Barcelona. This agreement will be effective from 2023.

The renewable energy will come from the Francisco Pizarro photovoltaic plant that Iberdrola is developing between the Extremaduran municipalities of Torrecillas de la Tiesa and Aldeacentenera, in Cáceres. The facility, which will soon come into operation, will prevent the emission into the atmosphere of more than 150,000 tonnes of CO2 per year. With 590 megawatts (MW) of installed capacity, the plant will become the largest photovoltaic plant in Europe and will generate the equivalent of the energy needed to supply 334,000 homes per year.

This project is part of Iberdrola's ambitious investment strategy in renewable energy generation projects in Spain, as well as its commitment to bilateral contracts as a way to promote the supply of energy at competitive and stable prices among large customers committed to decarbonisation.

"We are proud to be part of the development of projects like this that are transforming our country's energy present and future and are fully aligned with our goal to reach net zero emissions by 2040," says Marta Puyuelo, Director of Corporate Affairs and Sustainability for PepsiCo Southwest Europe. She adds, "This is one of many initiatives we are undertaking as part of PepsiCo Positive, our company's comprehensive transformation with sustainability at the core.

For his part, Sergio Hernández de Deza, Iberdrola's Director of Large Customers and Industrial Solutions, highlighted that "long-term green power purchase agreements open up many opportunities for the development of renewable projects that allow us to accelerate the energy transition to reduce dependence on fossil fuels. PPAs have become an optimal tool for managing the electricity supply of large consumer customers who share our commitment to a new, cleaner and more sustainable economic model".

The alliance between the two companies contributes to promoting sustainable investments in Spain and Portugal through two leading companies in their sector.

PepsiCo Positive for a Positive, Emissions-Free Value Chain
PepsiCo is committed to redoubling its efforts to reduce greenhouse gas (GHG) emissions by more than 40% by 2030 and achieve net zero emissions by 2040, a decade ahead of the Paris Agreement.

This initiative is part of PepsiCo Positive, the new sustainability-focused strategy through which the company is accelerating its transformation to promote a positive impact on both the planet and people. pep+ drives action and progress through three key pillars of its business: agriculture, value chain and positive brands.

Iberdrola with green energy as the basis for a sustainable economy
Iberdrola committed 20 years ago to a sustainable growth strategy based on electrification. The company plans to invest €150 billion by 2030 in renewable energies, electricity grids and energy storage in order to remain at the forefront of the energy revolution.

This pioneering commitment has enabled the Iberdrola group to become a global energy leader, with more than 38,300 MW of green power installed, of which 19,300 MW are in Spain (2,200 MW of which are solar).

The company aims to achieve carbon neutrality by 2050 and to reduce its global emissions intensity to 50 gCO2/kWh by 2030, having already reached an emissions intensity of 60gCO2/kWh in Europe, thanks to its commitment to the energy transition and the Paris Agreement.

Tell a friend:
PepsiCo Teams Up With Iberdrola to Drive Green Electricity at All of its Sites in Spain and Portugal