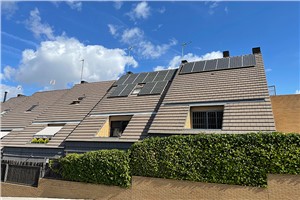 Iberdrola leads the photovoltaic self-consumption market in Spain, managing 40% of the country's self-consumption customers. As part of its commitment to accelerating the energy transition and developing new products to improve efficiency and energy savings, in 2015 the company became the first company in its sector to integrate self-consumption solutions into its range of services.

Iberdrola has consolidated its position as the benchmark company with a 75% increase in its self-consumption portfolio so far this year. Through Smart Solar, the company offers services for all types of customers, from domestic consumers to major industrial customers.

In addition, the company has made self-consumption available to any customer, whether or not they have their own roof. In Spain, more than two thirds of the population live in high-rise buildings. To cover this segment, in 2019 the company launched its Solar Communities, through which several users can share their own 100% renewable energy from the same photovoltaic installation. Iberdrola's collective self-consumption solutions include turnkey installations and the possibility of placing the solar panels without prior investment, handing over the roof space to the company and facilitating access to the green energy generated to people living within a radius of 500 metres.

The installation of a self-consumption solar system can lead to savings on annual bills of 30% in the case of residents' associations; 50% for companies and businesses; and up to 70% in single-family homes. These savings are produced in three ways: the energy produced by the installation that the user does not have to buy, the compensation for the surplus energy not consumed, which is fed into the grid, and the savings from lower taxes.

14,000 megawatts installed by 2030
The self-consumption market in Spain is currently in a process of accelerated development due to the effects of the increase in gas prices, aid from the European Union's Next Generation funds and the reduction in the cost of photovoltaic panels, among other factors. Iberdrola expects the number of installations to almost triple by 2022, to 170,000, compared to the 65,000 registered at the end of 2021 and the 100,000 currently available.

The company estimates that in the coming years even the high penetration scenario described in the Spanish Government's Self-Consumption Roadmap will be exceeded, reaching 14,000 MW installed by 2030.

Iberdrola maintains its commitment to continue to be a driver in the coming years of this technology which, in addition to reducing energy bills, protects against potential variations in energy prices, enables its use even at night (with the installation of a battery storage system) and allows the generation of energy free of CO2 emissions. In this regard, the company aims to maintain its current leadership share in this market in the coming years.

The development of smart solutions is one of the strategic lines of the Iberdrola group, which expects to reach 40 million contracts with customers worldwide by 2025 with services such as energy storage, heat pumps and electric mobility, in addition to self-consumption.

The Iberdrola group's sustainable growth model based on promoting the electrification of the economy through investment in renewable energies, electricity grids and energy storage has enabled it to become a global energy leader and the first in its sector in Europe by capitalisation, with a stock market value of around €70 billion.

Tell a friend:
Iberdrola Leads Solar Self-Consumption in Spain and Manages 40% of Installations