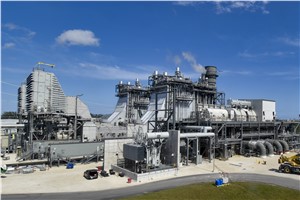 “FPL has worked for more than two decades to systematically modernize our fleet of power plants by tearing down aging, inefficient plants and replacing them with ultra-efficient, clean energy centers like the one in Dania Beach,” said FPL Chairman and CEO Eric Silagy. “For customers, it’s translated to billions in fuel savings. And, our highly efficient power plant fleet has prevented tens of millions of tons carbon dioxide emissions. With GE’s cutting-edge HA technology, the Dania Beach Clean Energy Center is now one of the most fuel-efficient plants in the world and will save customers even more money while further reducing our environmental footprint.”

Plants like the Dania Beach Clean Energy Center produce around-the-clock power, enabling FPL to continue its rapid solar expansion, which is the largest in the United States. Looking into the future, FPL believes that, with some modifications, natural gas units – like the ones at Dania Beach – may be fueled by hydrogen instead of by natural gas. The use of natural gas as a fuel for these units already results in the lowest carbon emissions possible from fossil fuel use. However, being able to use hydrogen as a fuel would result in zero carbon emissions from the operation of these units. FPL is currently developing a pilot project that will test using green hydrogen to replace a portion of the natural gas at its power plant in Okeechobee County, Florida – which also utilizes GE technology.

GE is already well positioned to help decarbonize the electric sector. To further decrease carbon emissions utilizing gas power, GE’s 7HA.03 gas turbine has the capability to burn up to 50% by volume of hydrogen when blended with natural gas. This capability is enabled by the DLN2.6e combustion system that is standard on the 7HA.03 units installed at Dania Beach. Developments in hydrogen-based power generation mean that gas turbines offer great potential to operate reducing their carbon intensity and can represent a destination technology, not just a bridging technology.

The industry-leading performance of the 7HA.03 gas turbine - more than 64% net combined-cycle efficiency, 75 MW ramp rate per minute, and enhanced flexibility were validated at GE’s Test Stand 7 in Greenville, SC (USA), which is the largest and most comprehensive full-speed, full-load gas turbine test facility in the world. Testing of the 7HA.03 in Greenville was executed in parallel with the installation of the gas turbines at Dania Beach, with immediate benefits for the on-site team from the rigorous testing and learning programs. GE validated the turbine control system settings and provided the adjustments to system software for improved turbine operability and reliability. In addition, factory testing of GE’s 7HA.03 gas turbine validated that it currently provides the lowest cost conversion of gas to electricity for 60 Hz grids. FPL and GE estimated savings of up to over $330 million over the life of the project. GE’s unique Test Stand allows the company and its customers to simulate thousands of hours of in-field operation to determine optimal performance for units prior to the start of commercial operations at-site.

“Today marks a significant milestone for our HA fleet as we celebrate the successful and on-time start for what is the currently the latest and most advanced 60 Hertz gas turbine in operation in the world,” said Eric Gray, President & CEO, Americas of GE Gas Power. “Built on the longstanding and successful relationship with FPL, this project is the result of exceptional teamwork among FPL, FieldCore, our field services company, GE’s on-site teams, and our Test Stand’s Engineering and testing teams. To be able to deliver such an incredible package of technology—safely and on-time—is a testament to what we were able to achieve together and will unlock new levels of power generation stability, emissions performance, and reliability across the FPL system.”

Quality was at the forefront of the project: GE’s 7HA.03 turbine benefits from a modular-based construction process— where large parts of the plant and its accessory are manufactured and shipped already assembled to the construction site. This included the gas turbine enclosure that houses the machinery, which consists of several pieces, each around the size of a shipping container. This modular approach led to enhanced plant economics and faster installation – approximately eight weeks less compared to a GE F-Class turbine.

GE’s HA gas turbine fleet counts 137 units ordered by more than 50 customers across 20 countries.  GE’s HA gas turbines have accumulated over 1.3 million operating hours of commercial experience across 69 HA units (as of May 2022). Currently, these units globally are supplying 36 gigawatts of power, the equivalent electricity needed to power more than 27 million US homes, a doubling since 2019.