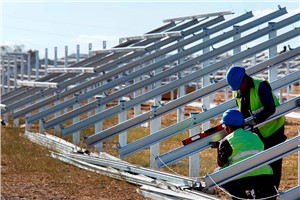 Iberdrola continues to make progress with its investment strategy in the Iberian Peninsula, this time in Portugal, where it has begun installing its first photovoltaic plants in the country with 86 MW.

These are four photovoltaic plants located in the district of Setúbal, south of the Portuguese capital: Algeruz II with an installed capacity of 27.35 MW, Conde (13.51 MW), Alcochete I (32.89 MW) and Alcochete II (12.72 MW).

The projects are currently under construction and two of them, the Alcochete I and II plants, will be equipped with bifacial technology. Bifacial technology achieves greater efficiency in the plant, as it has two light-sensitive surfaces. That is, electricity is produced from both sides of the panel, because it has a transparent sheet instead of opaque materials. A tracking system allows the modules to move according to the path of the sun, maximising energy harvesting and extending the lifetime of the plant by reducing degradation. In addition, bifacial solar cells reduce the average cost of electricity by 16%.

During the construction works, which are expected to last this year, 500 jobs will be created during peak periods and once operational they will be able to generate enough clean energy to supply more than 48,000 families, thus avoiding the emission of 56,000 tonnes of CO2 per year into the atmosphere.

Renewable commitment to the Iberian Peninsula
Iberdrola has been leading the energy transition for two decades, acting as a key driving force in the transformation of the industrial fabric and the green recovery of the economy and employment. To this end, the company has launched a historic investment plan of 150 billion euros over the next decade -75 billion euros by 2025-, with which to triple renewable capacity, double network assets and take advantage of the opportunities of the energy revolution facing the world's leading economies.

The company currently has a portfolio of 81,800 MW of renewable energy, of which 17,300 MW are located on the Iberian Peninsula and some 15,000 MW of these have connection rights.

In Spain, investments to 2025 amount to 14.3 billion euros, mainly for the deployment of an ambitious renewables and smart grids plan. In Spain, the company is a leader in the renewable sector with an installed capacity of 19,000 MW, which its investment plan to 2025 will increase to 25,000 MW.

After investments of 120 billion euros in the last twenty years, Iberdrola is a leader in renewable energy with nearly 37,000 MW installed worldwide, a volume that makes its generation park one of the cleanest in the energy sector.

With emissions of 98 grCO/kWh2, which is already two-thirds lower than the European average, Iberdrola's strategy of investing in clean energy and grids will lead Iberdrola to be a "carbon neutral" company in Europe by 2030.

Tell a friend:
Iberdrola Expands its Photovoltaic Business to Portugal With the Construction of Four Plants